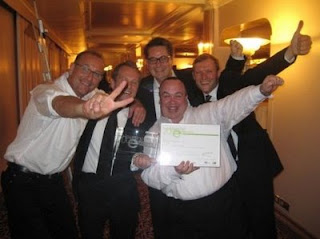 I’m not the greatest fan of black tie dinners but I did have a real hoot at the e-learning awards, where our table (Caspian Learning) won the award for best game/simulation. These guys are smart and really do understand the role of games in learning. This is probably the most exciting field in e-learning at the moment. The software is good, the price finally reasonable and the results outstanding. It led to some interesting chat on the role of games in technology and learning.

New to the game
This Christmas, games’ ads on TV are no longer just gunfests and smackdowns. It’s whole families on sofas playing the Wii, older couples playing Brain Training on the Nintendo DS and everyone exercising on Wii Fit. The industry has finally raised its game to break free of the traditional laddish genres. The new Nintendo DS has two cameras and allows you to create an avatar (of yourself, to insert into its downloadable games). This is personalised learning taken to the max. It’s a whole new ball game and the floodgates are now wide open for fun and games to enter all sorts of new territories.

Game shape the future
Games, it could be argued, are now shaping the future of technology itself. By revolutionising input devices and interfaces, games and gadgets have redefined the user experience. It started with comfortable controllers for consoles, then add-ons like steering wheels, guns and other real-world things you could hold in your hand. Then came gyroscopes and the detection of movement in real time and space with the Wii. Tilt detection in devices like the iPhone/iTouch allow you took at satellite images, tilt the screen and see the landscape tilt into 3D. Guitar Hero and a raft of other applications gave you a near-real experience of playing the guitar or drums. Games input devices became wireless as did the devices. The new Nintendo DSi has the full web page on the top screen and a magnified section on the bottom screen. On graphics, games have led the way, technically and aesthetically, influencing the movies, television and advertising. AI is now largely advanced in the games world. All of this is happening at breakneck speed in a highly competitive market. Where else would young people queue up all night to spend £50 or £300 out of their own pocket on a game or console? How much do you think they spend on traditional learning?

Two can play at that game
A feature of many games is the online dimension, where you can play others, compare scores, download and upload. My two teenage boys are quite comfortable in chatting with guys from the US “Hey dude, what’s it like in England?” using VOIP before proceeding to massacre each other online. Guitar Hero allows four mates to form a band and online gaming involves cohorts of thousands, even millions. World of Warcraft has become a global phenomenon and don’t forget Disney’s Penguin Club and dozens of other successful online gaming environments. Games have come to define web 3.0.

Social gaming
Social networking has also embraced viral casual games. Facebook is fast becoming a games platform, a good example being Caspian’s Christmas Game, where the viral nature of the game and presents sent, has given it real viral qualities. Forget Christmas cards, send someone an online present. Social gaming is getting very BIG, very fast.

Mobile gaming
Games are a vital component in devices such as iPOD touch, where the cleverness of its tilt technology allows new forms of gaming. This has become the way in which the device is marketed. Although mobiles have different operating systems, screen sizes and capabilities, almost all mobiles have Java, which turns them into little computers. Downloaded games is therefore big business. The iPhone and Google’s Android are creating whole new game markets as they’ve encouraged external developers to create content. Mobile games are HUGE.

Mind games
The name of the game should now be mind games, where you play to learn. It’s the antithesis of all that page turning stuff and, as Caspian have shown, be superior in terms of learning outcomes. Many of the basic problems in numeracy and other subjects and skills could be alleviated by the simple introduction of games into learning. The research by Derek Roberson, now peer reviewed and published is very clear – it works. Just sprinkle a little of the magic dust of games into learning and you solve the root cause problem in numeracy – motivation. Games are pushing the boundaries on technology, interfaces, software, leisure, movies and interaction. Education and training is now fair game.
at November 18, 2008

Some examples of games, avitars and mobile devices that hit me this week.

3. learndirect gets a good review in the Guardian for its on-line family game http://www.guardian.co.uk/technology/gamesblog/2008/nov/10/gameculture

There can be no doubt that a games aproach can motivte learning..

All we need now is the Rocket application to reduce the cost :-)

As 'digital natives' gradually become the workforce then companies who have been doing this for ages like Imparta and young upstarts like Caspian :-P will really start to come of age.

Did you hear that e-learning sims got a mention on Andrew Marr’s Start The Week show on Monday? Richard Susskind (IT Adviser to the Lord Chief Justice) was explaining how technology will transform the legal profession through the automation of routine tasks. Asked how junior lawyers will gain the experience they need to become experts if they don’t have simple tasks to cut their teeth on, he answered: ‘emerging e-learning technologies…immersing oneself in practical real-life problems through simulations.’ Funnily (and sadly predictable, given all the dull e-learning courses out there) he qualified his answer by saying he realised most people would find the prospect of more e-learning ‘not compelling’….