Social Co-location
The strangest example of Social Co-location I’ve seen happened to me by accident. This month, when my niece was staying with us, she left the room with her laptop on. I noticed a strange guy sitting in a room on her screen. Turns out this was her boyfriend, who lives in Beersheba in Israel. They liked to keep each others’ webcams on, for hours on end, as it made them feel as if they were in the same room together. How weird is that? 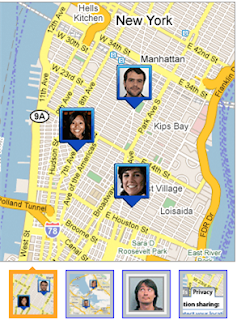 orking seems to know no limits with 110 million on Facebook, 83 million on MySpace and the world Twittering away. This phenomenon, keeping in touch with others, is a hurricane, still gathering force. Mobile voice was followed by mobile texting, then MySpace, Facebook, Twitter and now Google Latitude. I call this latest dimension to Social networking, Social Co-location, people knowing where others are at any time.
It’s yet another example of the death of distance, taking us back, I think, to more natural social groupings. We have evolved to live in social groups of around 30, with kinship at the core of our groupings. Robert Dunbar then explored the cognitive limits of our social groups, showing that it topped out at around 150. This seems to have been superseded by actual behaviour on social networking, where the 150 limit is exceeded. Or has it? It’s difficult to get average figures for Facebook, but one source quotes; Average Number of Friends 164 and Median Number of Friends: 132, giving some support to Dunbar’s figures.
Google in the desert
Google have wrapped the earth with several beautiful several skins – Google Earth, Google Maps and Google Streets. I’ll never forget the first time I saw Google Earth and literally swooned with admiration. In December, I was planning a walk on the West Bank of Luxor, in Egypt, and did it using Google Earth. As I was swooping around, I noticed some huge mounds of earth south of my planned route. On further exploration of the Wikipedia links on the map, I found that it was an enormous ancient Egyptian harbour. Armed with a colour printout of the area, we walked across the desert, via a Monastery, and ended up showing these images to the dirt-poor kids, with their goats, who lived on the fringe of the desert. They were puzzled at first. They didn’t speak English, and we knew little Arabic. But they got it. I pointed to the sky and showed them their house on the map, they pointed out other features on the printout. It was a fantastic moment, as Google put two 50 year old guys in touch with the curious minds of these young kids. Everywhere we went we were invited in for tea by these wonderfully friendly people. I’ll never forget it.

Lost soul
In a trip into the desert later that week by car, we had to put our guide in the boot of the car as there was no room inside! After a fantastic trip where he showed us ancient tombs and prehistoric rock art, we returned to the Nile Valley road. I was keen to get a photograph of him emerging from the boot, but when we opened it, it was empty! He had lost a shoe and in the cloud of dust, created by our car, had fallen out without us realising. We soon found him, using binoculars, and all had a real laugh. Google Earth was used when we got back to identify what we had seen, even the academic papers describing the rock paintings. Google Earth gave us a view of the area we would never have had on the ground or with maps.

itude will take all of this to an altogether different level. It layers your location and the location of others you know on to Google Maps. It’s an opt-in system, and useful if you want to locate friends, relatives and colleagues. Nowhere to hide? If you’re a little concerned about privacy, or hiding from your father, mother, wife or husband, you can set your location to somewhere else, on a friend by friend basis. Kid and teenage tracking is likely to be big, but they’ll get round it. They always do. I’m sure we’ll be surprised at how this one is used and look forward to the first batch of divorces as people forget to switch it off and so on.

To get the lowdown on Latitude, and add it to tour computer or mobile click here.
For a video on the privacy features click here.
at February 04, 2009

Google is a symbol of how much potential each human has to make a difference. If even a few of use use it the World would be a different place. But the honesty to deliver lacks in most of us.

See the reality of $10 laptop. Read the article under " $10 laptop becomes a 'laughing stock'". The Link: http://www.pressdisplay.com/pressdisplay/viewer.aspx

Thanks for sharing the Google latitude. Since you are interested in the Egyptian scripts I wanted to share a link of a blog in Yahoo 360. It is a blog by James Bowles and he has written a book on Egypt. I thought you might be interested. The books are:
The Egyptian Thoth among the Nascan figures©1998The Gods, Gemini, and the Great Pyramid, author james bowles.
The blog link: http://blog.360.yahoo.com/blog-r5XzbFI7a6Lo_2n.TLirOn4-?cq=1

"How weird is that?" Not weird at all!

I used to keep Skype chat open with one colleague who worked remotely, just so that we could engage in incidental chitchat as if he were in the same office.

I keep Twitter open much of the time now because I work in less than splendid isolation, and it makes me feel less alone.

My kids have MSN open all the time while they're doing their homework or playing WoW or whatever, and they conduct sporadic conversations with several people throughout the day.

I blogged a while back about wanting to attend weddings and funerals via webcast. It's the age we live in, Donald!

I think your niece and her boyfriend have found a 21st century way to deal with separation. Good for her.

Interesting. I get the messenger/Twitter/Facebook open thing but what threw me was the full webcam images. She explained that this gave them a sense of shared space, as if they were in the same room. That, for me, is an interesting development and I could see people doing this through their 50 inch TVs and really getting into this higher level of co-location.

Hi Dave
There are certainly complex sets of skills, but this does not preclude them being learned online. For example, flight simulators deal with complex skills around take off, emergencies and landings. They push pilots to the limits of their competence. Large scale war games do a similar job in the military.

I have some interesting experience in interview simulation. These simulations can be extremely complex. The one I built had hundreds of video recored answers and the skills were well tested. In many ways the careful design and construction of such performance simulators can be superior to the 'trainer-driven' experience. Simulators like these can contain many more variations on interviewees/interviewers and are ultimately cheap to replicate and scale. Human coaching is notoriously expensive.

This is not to say that practice is not necessary - but that is generally true in learning, a fact that is simply wholly ignored in training 'courses'. The joy of online simulations/games is that they can be used over and over again over time.