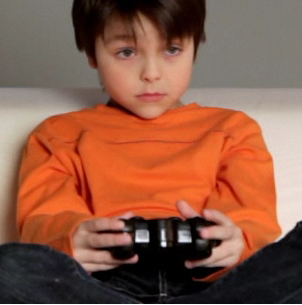 Derek Robertson has a devastating critique of this image used by the Department of Health to claim that videogames are killers.
Their investigation - nil
Their daignosis - terminal
Their treatment - look at our hokey little website 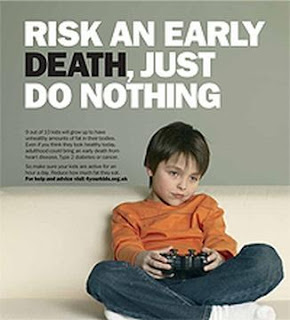 This is the part of Government responsible for our medical welfare, so why are they behaving like uneducated idiots? As Derek points out, this kid has a PS3 controller in his hands, but THERE'S NO WAY he's playing a game. It's a cheat, a lie, a setup. It smacks of some DoH, PR robot telling the photographer to make the kid look bored and disengaged.
Joined up Government? I suspect this lot couldn't join up the dots in a kids' magazine. The idiots in the Department have clearly NOT read the government commissioned Byron report.
PS
Sony are considering legal action over unauthorised use of their controller and the hapless, and The Gate (agency), may be regretting this contract.
at March 16, 2009

This is hilarious, I agree there is no logical connection between playing video games and the food habits and out door activity they are suggesting. The description of the site made me laugh, hokey?
The tip about the five kinds of foods is a good reminder though. I just squeezed oranges for my daughter and am feeling a little confused about the two liter coke I had got for the kids earlier. To give or not to give?

I think they should have been more precise, like these many hours of gaming or being online are reasonable and they could have supported with a research how time spent beyond a limit was not healthy. Nice post I have two kids so I get lot many clues here about the decision making everyday.

What an hysterical response. On face value I expect the message behind the image simply means get out and exercise more for healthy living.

Some computer games in some contexts may well educational value. But there are many where common sense would suggest otherwise. Who cares if the controller is plugged in or not?

It's not hysterical to expose duplicity (Byron report versus DoH), and the controller being plugged in (or not) is irrelevant.

Games are a growing and important educational tool and innovations such as Brain Training and the Wii fit should be admired, not trashed by some second-rate advertising campaign. Would you be happy if the image were of a child bored out of their skull at a school desk?

Hi, Donald. It's nothing to do with this post but I'm just curious to knwo why you dislike Bloom so much? Or is the problem not with Bloom per se but the way he is used?

OK, it was a start. Unfortunately, this is about as far as most people get. They rarely dig deeper into his further six levels in the cognitive, six different aspects of psychomotor skills and his rather useless three types of affective.

Since then we've had dozens of taxonomies which sliced and diced in all sorts of ways. We've had Biggs, Wills, Bateson, Belbin and dozens more. The problem with taxonomies is their attempt to pin down the complexity of cognition in a list of simple categories. In practice, learning doesn’t fall into these neat divisions. It’s a much more complex and messier set of cognitive processes.

So, it's not that I dislike him, I just dislike sloppy, old theory that only survives in lazy 'train the trainer' courses. And don't get me going on Gagne, Maslow, Kirkpatrick or Vygotsky (just type any of these names in the search box of my blog for detail.

Yes, I have enjoyed your thoughts on Vygotsky before!

I saw an activity the other day where teachers were asked to suggest questions/activites about fire. They wrote these on post it notes. Then there were a list of headings of the different types of thinking skills Bloom identified and they had to post their suggestions under the appropriate heading. It was remarkable (or was it?) what a narrow range of headings were used and those were mostly of the type of thinking that doesn't particularly stretch (they were in an G+T workshop).

I thought this was quite ueseful and use the taxonmy when I am designing questions/activities.

On the subject of teacher education, I went to the North East London Polytechnic in 1980. We had one day a week in the poly, one study day and three days a week in a school for the entire year. We knew that if we had a discipline problem we had it for the year, not just for six weeks. We did some theory. We did not have an exam. instead we had to design a teachning programme, show how we used theory to inform it, deliver it and then evaluate it. It was very practical and my friends who were in traditional university courses envied my hands on approach. The poly's perspective was to introduce you to some education theory and then suggest you teach for a few years and come back and do a Master's where you could pitch the theories against your experience.

Anyway, now I have stopped teaching I cna read about it. Who do you recommend?

Hi Francis
On 'teaching' I like John Taylor Gatto and Roger Schank. I've reviewed dozens of books on learning, and these can be found on the www.epic.co.uk website, under 'Resources'. Some also on www.line.co.uk website and www.caspainl;earning.co.uk.