David Kolb is best known for his work on experiential learning. Heavily influenced by Dewey, and Piaget, he preferred an experiential model for learning, as opposed to purely cognitive models. We obviously learn much from experience, either formally in terms of structured exposure in training or in work and life itself through informal learning. Kolb and others since have tried to examine how we learn experientially and how this can be used to guide instructional strategies.
Four stage learning cycle
Kolb (with Roger Fry) created his famous four stage learning cycle. 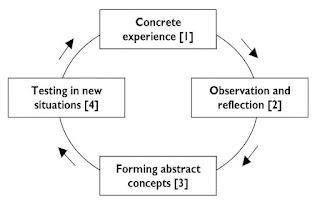 He claims that we can enter the cycle at any point and that learning is really a process of looping round and round, seeing improvement on each loop. We may, for example, be able to do something but not express it in abstract terms. In the end, however, learning is formed through real experience, where one’s ideas are put to the test. Feedback then shapes the learning so that performance improves.
Learning styles
In Experiential Learning Kolb presents a learning styles theory:
Convergers like to take abstract ideas and reason then apply them to solve problems
Divergers use concrete experience and reflective observation to come up with imaginative solutions
Assimilators take abstract ideas and reason and combine it with reflective observation
Accommodators use concrete experience and active experimentation and like to get on with doing things
This schema gave rise to a learning styles assessment that could be used to determine the most appropriate form of learning for that individual.
Critique
Models such as Kolb’s four stage, experiential, cycle model can be over-simplistic. They rarely match the reality of the learning process and one can argue that stages can be skipped or performed in parallel. Subsequent tests of the model by Jarvis (1987, 1995) have indeed shown that things are more complex. The model is less of a cycle and more of a causal web. Others have argued that it pays too little attention to theory, information tasks, memorisation and reflection. Research into skills acquisition and the use of simulators has taken us well beyond the Kolb model into far more sophisticated analyses of learning and practice through experience.
On learning styles, it is hard to believe that people fall into these categories or that learning styles do, as many learning styles theorists claim, usually fall neatly into four categories. One negative influence on learning theory, although Kolb cannot be held responsible, is that the model had a direct influence on Honey and Mumford’s learning styles theory leading to a simplistic, four-category description of types of learning and learners. Neither Kolb nor Honey & Mumford’s learning styles theory were in any real sense, empirically researched. In fact recent research as doubted their usefulness and thrown doubt on their very existence.
Conclusion
Kolb is a refreshing alternative to the overemphasis on academic, knowledge-based learning and the idea of cyclical learning informed by experience is sound, as is the importance of formative experiences themselves in learning. However we must be careful in reducing experiential learning or learning by doing to such a simple schema. Although this model is a useful guide, in practice, the design of experiential learning is more complex.
Bibliography
Kolb, D. A. (1984) Experiential Learning, Englewood Cliffs, NJ.: Prentice Hall.
Kolb, D. A. (1976) The Learning Style Inventory: Technical Manual, Boston, Ma.: McBer.
Kolb, D. A. (with J. Osland and I. Rubin) (1995a) Organizational Behavior: An Experiential Approach to Human Behavior in Organizations 6e, Englewood Cliffs, NJ: Prentice Hall.
Kolb. D. A. and Fry, R. (1975) 'Toward an applied theory of experiential learning;, in C. Cooper (ed.) Theories of Group Process, London: John Wiley.
Jarvis, P. (1987) Adult Learning in the Social Context, London: Croom Helm. 220 pages.
Jarvis P. (1995) Adult and Continuing Education. Theory and practice 2e, London: Routledge.
at April 25, 2012

Hi Donald;
From the theoretical side, I think developments in pragmatism (especially Vygotsky and the dialogical thinkers) can dig deeper into Kolb's Dewey inspired insights. In Vygotsky's model, cognition and acting are not stages, but are like two sides of a coin, each embedded in the other. Dialogic thinkers bring the cognition of others into the equation. The idea that no one thinks alone.
"the individual mind can exist only in relation to other minds with shared meanings" (Mead 1982: 5) From Wikipedia's George Heabert Mead Article.
The next quotes are a prelude to John Shotter's paper here: http://www.johnshotter.com/mypapers/Consciousness.pdf
“But a certain kind of associated or joint life when brought into being has an unexpected by-product – the formation of those peculiar acquired dispositions, attitudes, which are termed mind” (Dewey, 1917, p.272).
“The feeling of an unbridgeable gulf between consciousness and brain processes: how does it come about that this does not come into the considerations of our ordinary life?” (Wittgenstein, 1953, no.412).
“... consciousness itself can arise and become a viable fact only in the material embodiment of signs” (Voloshinov, 1986, p.11).
“It is more productive to conceive of the mind as a virtuality than as a framework, as a dynamism than as a structure” (Benveniste, 1971, p.63).