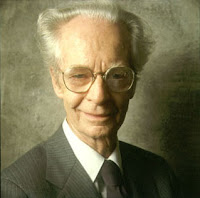 B.F. Skinner, the American psychologist, promoted pure  or radical (his term) behaviourism. Only observable phenomena are allowed as evidence, in this case stimuli and their behavioural responses. No mental events were to be considered admissible, as they were unobservable. His experimental work concentrated on animals and the famous Skinner Box, where rats had to press levers to get food.
Although he was not averse to human experimentation, the claim that he raised his daughter in a "Skinner box" and that she sued her father ultimately committing suicide, is an urban myth. However, he did construct an ‘air-crib’ for his baby daughter, jokingly called ‘heir conditioning’, which was manufactured by several companies. His most bizarre invention is surely the pigeon guided missile, where a pigeon, encased in the nose cone with a screen, would peck at the target on the screen and guide the missile to its destination. It was never used.
Operant conditioning
Learning, for Skinner was the ability of an organism to learn to operate in its environment (operant conditioning). If a behaviour is reinforced through repeated stimuli it is more likely to be repeated. An important facet of this theory is that positive reinforcement is more powerful than negative reinforcement i.e. carrots are better than sticks. A problem with relying just on observable behaviour is that what one takes as evidence of reinforcement is the repeated behaviour itself. The evidence is therefore self-fulfilling. Withdrawing a reinforced behaviour also leads to the extinction of the behaviour.
Teaching machines and Programmed Instruction
Skinner was profoundly affected when he witnessed poor teaching in his daughter’s maths class. The teacher, he thought, was violating almost everything we know about learning. Rather than adapting to the ability of the child, they were being forced through sheets of problems with no immediate feedback on each problem. The teacher was clearly not shaping  the behaviour of any of the children in the class. They clearly required help in reinforcement.
That same afternoon he built his ‘teaching machine’, allowing learners to practice already learnt skills. Within three years he had developed programmed instruction, which broke material down into small steps, and as performance improved, less and less support was provided. As this was before the age of computers, most of this was produced in books. His article Teaching Machines published in Science (1958) is still a relevant read today and in 1968 he published The Technology of Teaching, a collection of writings on technology and education. His analysis of what sequencing and feedback was required was way ahead of his time and technology.
Behaviourism and social engineering
One consequence of his strict behaviourism was the development of the technology of conditioning; "teaching machines" and other techniques to shape human behaviour on contraception and so on. Walden Two (1961) was an attempt to describe and prescribe this behaviourist utopia in the form of a novel, interestingly, this was to creep into parenting manuals and other forms of social engineering. It is worryingly fascist. There are still elements of this in social engineering policies and techniques practiced by governments today. All attempts to put Walden Two into practice failed.
Conclusion
‘That was great for you, how was it for me?’ said the behaviourist after sex. So goes the famous joke but it shows the core weakness of behaviourism. Obsessively ignoring all internal, cognitive mental events led to a relevant, but narrow account of learning. Its over-dependence on external stimuli along with a tendency to take animal experiments and extend them to humans led to a suffocating, straightjacketed view of psychology. In The Behaviour of Organisms, only two were mentioned; rats and pigeons. This reliance on animal experimentation was far too narrow. To ignore the brain and internal events was to ignore the vast amount of evidence now available to experimental psychologists. We have motivation, emotions, instincts, beliefs, memory and many other facets of the brain which show that it is far from being a blank slate, etched by the environment. Skinner’s behaviourism was seriously rejected, initially by Chomsky, who showed that behaviourism could not account for language learning but by many other cognitive psychologists. Chomsky's review of Verbal Behavior, is widely regarded as a turning point in psychology, shifting emphasis from hard behaviourism to cognitive approaches. However its modern form, associatism, a learning theory used by most neural network theorists, lives on.
Bibliography
Skinner, B. (1938). The Behavior of Organisms
Skinner, B. (1953). Science and human behavior. New York: MacMillan.
Skinner, B. (1957). Verbal Behaviour
Skinner, B. (1961, repr. 1976). Walden Two
Skinner, B. (1968). TheTechnology of Teaching. New York: Appleton-Crofts.
Skinner, B. (1971). Beyond Freedom and Dignity
Skinner, B. (1974). About Behaviorism
http://www.bfskinner.org/index.asp
Skinner Foundation
http://www.snopes.com/science/skinner.asp
Urban myth about Skinner’s box.
at April 05, 2012

These summaries are great. Just one problem - you've provided so few widgets to navigate your blog that it's almost impossible to go back and read anything again. If you don't believe me just try to find Plato for instance. The only way is to use the Archive list but since you have limited the maximum number of posts on each page it's not possible to get all of March for instance. I think you'll agree that these summaries deserve better.

No need to publish this.