The fake 'Wellness' cult in education & the workplace

As a Board member of an organisation, with over 100 employees, I was shocked to discover that we’ve embarked on a ‘Wellness’ survey. This comes on the back of a wave of ‘Mindfulness’ courses I’ve witnessed in organisations and education, and before that the obsession with ‘Happiness’. I’m suspicious of these anodyne ‘…ness’ words. For me it’s a morass of unsubstantiated therapeutic theory, fuzzy terms and feeble thinking. But there’s a more worrying side to all this….
Wellness in children
In Scotland, this has taken a rather spooky turn. The Nationalist government, fuelled by electoral success, has sneaked in a policy that is not far short of a Stasi 2.0 approach to childcare. Every child is to have a ‘state guardian’ who is NOT the parent. Children automatically become wards of the state under the watch of an army of named persons (state employees). The idiotic mnemonics already employed include; SHANARRI (Safe, Healthy, Achieving, Nurtured, Active, Respected, Responsible, Included) and GIRFEC “Getting It Right For Every Child”. This results in this type of horror story, one of wellness gone bad.
Wellness in education
A large number of US Universities have taken to Wellness contracts. The University of Massachusetts, along with many others, has a Campus Wellness Contract. Undergraduates are asked to sign a contract that commits them to a healthy lifestyle (roughly conforming to white, Christian values). The last thing many need at that age of joy, curiosity and exploration, is some contract that turns you into a dull, conformist. Is that the real goal of education, to be ‘well’, as defined by some dull, abstentious benchmark?
Workplace wellness
Workplace ‘wellness’ programmes abound, largely surveys and weak documents no sooner read than forgotten. Since when did HR think they have the right to take over the role therapists and responsibility for the emotional welfare of employees? HR, rather than sticking to their worthy role of development, pay and rations, has always wanted to be taken more seriously. This just opens them up to ridicule. What gave them the right to take control of our emotional lives? Why do they think they are qualified to become therapeutic and moral experts? In practice, this means reading one or two self-help books or a short course run by people who themselves cobble together some evidence-empty, PowerPoint and downloaded a survey template. It’s all so superficial and hollow.
How did this happen?
This debate goes back to the Greeks and reached its peak with Bentham, Mill and subsequent philosophical and political debate around `Utilitarianism’ in the late 19th C. ‘The Greatest Happiness Principle’ led to a definition of happiness in terms of pleasure and the absence of pain. However, Bentham’s ‘hedonic calculus’ proved too awkward to use in any practical sense. Mill opted for quality, not quantity, with a focus on higher pleasures, but there were still problems of definition, and measurability. The arguments that ‘happiness’ is vague, difficult to measure and cannot be used as a guide for moral or social well-being, remain a problem for positive psychology.
Unfortunately, just as we thought it had receded into history, specious psychoanalysis brought all of this back under another guise – the culture of therapy. It all started with Freud (impact on education here) but it is Rogers (critique here), and more recently Seligman (the pied-piper of positive psychology), that dragged it into the world of education and training.

The great Barbara Ehrenreich, in Smile or Die, (detailed review here) is one of many who have criticised the rise of positive psychology and thinking. She thinks the ‘happy’ and ‘wellness’ movement replaces reality with positive illusions, and I agree. You can think positively but “at the cost of less realism”. Seligman’s book Authentic Happiness was been seen by as Ehrenreich as a “jumble of anecdotes”.  She found his formula for happiness banal: H= S+F+C (Happiness = set range, circumstances and voluntary control). In the Journal of Happiness Studies she reads study after study linking happiness to every conceivable outcome but it’s a lop-sided view of the world, with no room for the realism of negative results. 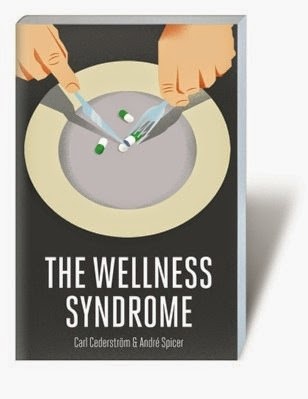 The Wellness Syndrome by Carl Cederstrom and Andre Spicer,  is another welcome antidote to this wave of woolliness. The authors rightly expose it as a faddish syndrome, really a moral obligation and imperative to regulate your feelings and behaviour. The happy/unhappy dualism slips into the good/bad moral imperative. What they posit as the real mechanism for this movement is an appeal to narcissism. It’s a programme actually appeals to the ‘me’ in all of us.
Their main point is that it is counterproductive. The more you seek wellness, the less well you become. Constantly worrying about how well you are is no way to live your life. In this clever but simple little study two groups watched a happiness inducing video. Those who had undergone exposure to ‘happiness’ treatment before watching the video felt worse than those who had not.
Conclusion
In all of these cases an unwelcome, and I suspect, unintended consequence, of all of this happiness, mindfulness and wellness effort, is a condescending attitude towards the rest of us who ‘don’t get it’ or ‘don’t live up to these standards’. There is a smugness about the whole affair, a stink of righteousness. It’s the modern equivalent of a meme-inspired cult, a touch of the Temperence movement and smattering of Scientology.
at March 28, 2015

To be fair, Seligman's approaches could hardly be called "wooly". They tend to be pragmatic. And this observation: "The more you seek wellness, the less well you become. Constantly worrying about how well you are is no way to live your life." does not conflict with Seligman's advice. Some of which could be interpreted as "Get over yourself and you'll be happier". And of course I'm sure you've no objection to the idea that if you are going to pontificate about happiness it should be done on some sort of scientific basis. Could it be that you have some objection to people telling others how to be happy? Perhaps we need some research to find out if giving people god advice on how best to live their lives is counter-productive. In the meantime I can't wait and I'll take the risk of making suggestions to my own children on how they might maximise their chances of happy lives (very Benthanian).

My objectiosns Brian are beased on 1) Philosophical work done on the subject 2) Evidence, for example I did link to one study that illustrates my point about it being countreproductive - there are others http://psycnet.apa.org/journals/emo/11/4/807/

Don, I think you protest too much. It is easy to make fun of wellness or happiness programme. But would we really prefer a workplace where people are unhappy to one where they are happy? Would we really create an unhealthy workplace to a healthy one. Would we prefer a disengaged workforce to an engaged one?

Yes, there are some frivolous approaches. But for me, what makes people feel good about themselves - and perform better - is not fun and games, but having meaning and purpose in their work, and the trust and autonomy to do it well. Do we think that pupils will learn better if teachers are unhappy and don't feel trusted?

We are inviting Andre Spicer to debate at a forthcoming LPI wellbeing event, and I will read his book with interest. However critiquing some of the sillier aspects of wellness programmes surely doesn't take away from the benefits of a healthy workplace with real trust and autonomy for those who work there.

Hi Henry. Don't disagee with any of this but these simple, binary oppositions in no way reflect the rich and complex mental states of people at work. As I say, these programmes assume these simple dualisms and open HR up to ridicule. Treat people well, respect them, make sure they're failry rewarded, listen to what they have to say, develop their skills but don't go over that line and become their pseudo-therapist.

Donald, a few data points. (Mindfulness is a keeper, not a fad.)

Writing about wellness, the Wall Street Journal offered "While the idea of mindfulness originates in the serious practice of meditation, [Harvard] B-school faculty say it has many applications for executives who aren't looking for a spiritual fix but simply want to clear their heads and become aware of reflexive, emotional reactions that can lead to bad decisions."

EBay has meditation rooms equipped with pillows and flowers. Twitter and Facebook are doing all they can to stay ahead in the mindfulness race. Evan Williams, one of Twitter’s founders, has introduced regular meditation sessions in his new venture, the Obvious Corporation, a start-up incubator and investment vehicle.

The Duke University School of Medicine has produced research that shows that, in America, an hour of yoga a week reduces stress levels in employees by a third and cuts health-care costs by an average of $2,000 a year.

...programs have popped up at Ford, Google, Target, Adobe—and even Goldman Sachs and Davos.

An annual conference called Wisdom 2.0 draws together thousands of spiritually minded technologists from, among others, Facebook, Twitter and LinkedIn, who trade tips on how to stay calm in the digital age. (This year we had Starbucks, Blackrock, Eileen Fisher, Google, and others describe their mindfulness initiatives.)

This is not NLP or some other fluff. It's a way for people to be more contemplative, focused, and un-stressed. It's mindless not to take up the practice.

Do this, Donald: sit quietly for 20 minutes. Focus on your breath. In/out. In/out. Lose the words and just experience it. When your attention wanders, bring it back by focusing on your breathing and how your bod feels. Appreciate the quiet. Calm the drunken monkeys that usually pollute your thinking; just go back to that in/out of the breath.

Twenty minutes seems like an eternity the first time, but stick with it. In/out.