Working memory is the door through which all learning must enter, so it is important to know what it is and its limitations. Baddeley looked specifically at ‘encoding’, to unpack what he called ‘working memory’ to replace the previous, simpler ‘short-term’ memory model. This is important as a working knowledge of ‘working’ memory can lead to better teaching and learning. By designing material that is optimised for getting through working memory to long-term memory, significant improvements in teaching and learning are theoretically possible.

Working memory, he showed, had three components:
1. Executive decision making
2. Verbal rehearsal loop
3. Visuospatial sketch pad
The original 1968 model had three components but he refined the model in 2000 with the addition of an ‘Episodic buffer’. 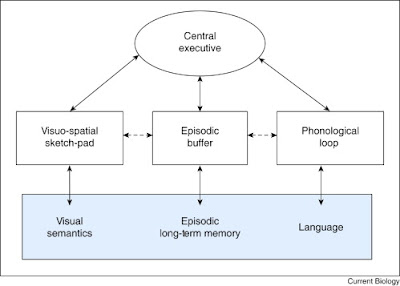 So the three ‘slave systems’ are:
1) The phonological loop which takes auditory information as sound or from written language which is rehearsed through our ‘inner voice’
2) The visuospatial sketch pad copes with visual information such as space, shape, colour, location and movement
3) The episodic buffer adds the dimension of time and integrates experiences.

There are often questions in online learning about the presentation of audio and text. Should audio accompany text or be heard on its own. Clark & Meyer recommend not confusing working memory by playing both at the same time. This seems to cause problems with attention through interferences or switching. So research into memory and the way we cope with different media can help with media mix choices. Cognitive overload, an almost constant problem in learning, especially long lectures and experiences where the learner has no control over the pace of presentation, is another issue illuminated by research into working memory.

The phonological loop has resulted in much fruitful research around vocabulary and language acquisition. By exposing the complexity and components of working memory, a huge amount of subsequent research was possible. An interesting line of inquiry is whether working memory can be trained to improve and result in significant improvements in learning.