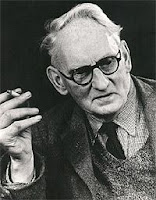 Alexander Sutherland Neill was a Scottish learning theorist, son of parents who were both teachers, who we know mostly through his book and school of the same name ‘Summerhill’, actually a collation of four earlier books on the school. Although in the tradition of Rousseau, he had never read Rousseau until fifty years after he opened his school and even then thought that Emile was too teacher-led. His real influences were the progressive schools movements in the UK and Germany, and in terms of theory, Sigmund Freud.

Following Freud, he thought children become maladjusted and unhappy when they are repressed by outside forces. The resentful emotions within the child cannot be expressed towards parents and teachers, so turns into self-loathing and unhappiness. In school these repressive forces are discipline, a fixed timetable, moral and religious instruction. When you free a child from these constraints, he believed, the end result is ‘well-being’. This was part of his overall belief that we underestimate the role of emotion in education, with its focus on reason; all head, no heart.

As a believer in the innate goodness of children, he saw no need for moral instruction and certainly no need for punishment, which he saw literally as an act of hate. In a sense Neill had no systematic theory to expound but he was clear that he believed strongly that children should be allowed to develop independently of the normal strictures of formal education. They were free to choose lessons and free to be themselves. It was inner motivation he wanted to foster not external compulsion.

At Summerhill, children could choose whether to attend lessons or not. The curriculum was broad, with academic subjects but also an emphasis on the arts, dance, drama and so on, which he saw as both therapeutic and useful for children who were not academic. The school was democratic with decisions made by voting at weekly meetings, where Neill had just one vote. On punishment, they took up Wollstonecraft’s idea of peer-punishment, where the democratic group determined the reprimand, which was never physical punishment.

Classes at Summerhill, despite the reputation, were rather traditional and some thought that his interest in teaching as such, was minimal, as it was the happiness of the child that mattered more than pedagogy. The reason for Summerhill’s continued existence as an experiment that never scaled, is that there is no satisfactory solution to the actual problem of structured learning, so that the ethos can be accused of being anti-academic.

Summerhill started in Germany, then Austria, Lyme Regis, then Suffolk, where it is still going. Its numbers fell to as low as 25 in the 50s but on publishing his books the school attracted a huge amount of international attention and it flourished in the 1960s, although coach loads of observers turned out to be too much of an intrusion and the school rejected its celebrity status to return to normal. As the spirit of the 60s faded, in the 70s and 80s pupil numbers declined. It is still practicing pupil freedom and will celebrate its centenary next year with around 100 pupils.
Summerhill, published in 1960 in the US then 1962 in the UK was a hugely popular book but Summerhill as a concept never took off. Students certainly seemed to like the experience but parents and government never really took its model seriously. Nevertheless, Neill has had a lasting effect on educational theory. He was the leading light in progressive schooling and provides a model that, although not popular, promoted ideas around the student voice, children’s rights and a balanced curriculum.