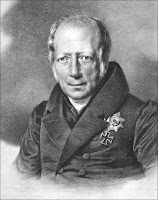 After Napoleon had defeated Prussia in 1806, the Prussian state reflected on what had caused this catastrophe and out of that trauma came a reformed system of schooling designed by Wilhelm von Humboldt. The aim was not to produce rounded, autonomous citizens but young men obedient to a military culture and, oddly as he never attended school himself, he set about standardising many of the features of schooling we still see today.
Influenced by the ancient Greeks, his vision of education revolved around ‘character’ and the Platonic idea that education develops and leads one towards a fruitful life. This lde to him defining a school and University system that persists to this day.

The schooling that is still prevalent today is largely based on this Prussian model; a set school day, set syllabus, several subjects taught in periods across the day, rows of seats and bells to signal class changes. This stretched to standardised textbooks, state exams and inspections. Although his plans for reform were not published until after his death, along with a piece from a planned ‘Treatise of Human Education’. He saw education as providing a means to an end, the student’s interaction with the world, and not as an end-in-itself. The individual must do more than just satisfy their personal curiosity, they have personal, social and state responsibilities. He was, essentially, an Enlightenment thinker who saw progress of the individual, state and state of man, as the purpose of education.
However, his views on academic versus vocational education strongly influenced education today. He thought of education as a preparation for a life of skills and saw individuals as being prepared for vocations by receiving an academic education. First, vocational skills being easily acquired later. This was to have a profound effect on education globally, diminishing the vocational for the academic approach. Horace Mann, an American, who visited Prussia in 1843, brought this system back to the US and in 1852 Massachusetts adopted the system statewide.

His greater influence was on Higher Education, where his combined model of research and teaching became and is now the global norm. This ‘Humboldtian Model’ was an Enlightenment idea, based on the freedom, cultivation and autonomy of the individual. To this end teaching should be informed by research.

Unfortunately, it has led to the downgrading of vocational learning, apart, of course, from those Universities teach, like medicine, engineering and, oddly, dentistry. Bryan Caplan has shown the that this approach is wasteful for many students and society as a whole. As much of it is signalling for the employment market, it does not conform to the Humboldtian ideal of intellectual inquiry. Few students ever attend any other lectures than those mandated and even then drop-out is substantial. The cost to society is great in terms of cost and national debt. Caplan argues that much of this money could be better spent on other areas of social good, such as healthcare and vocational education. Even Germany, a strong economy, made sure that the academic and vocational systems were both robust.
Another criticism is the link between research and teaching. The evidence suggests that teaching skills, such as communications, presentation skills, interpersonal skills are not often high in those whose speciality is systematic research. The modern academic has two jobs research and teaching, their passion, training and skills are in the former, with little in the way of training in the latter.

Humboldt’s influence has been profound, in both schools and Universities. He set the tone for a system that aims to prepare and get young people into University, as a grounding for good citizenship. This has become the model for most countries in the developed world. No other figure matches him for direct causal influence on the structures and methods for education. Yet that influence may be the problem. It has become a mantra which Schank, Caplan, Thiel and many others consider wasteful.
at February 13, 2020