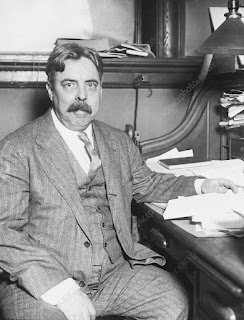 Edward Thorndike deserves much more attention than he gets in the history of educational psychology. Inspired by William James, he was an assiduous experimenter, who revolutionised experimental psychology by introducing scientific rigour into his work. This led to ground-breaking work in important learning topics such as ‘transfer’.

Children were the subject of his early experimental research but Harvard stopped him from using human subjects, so he moved to chickens and cats. In fact his earliest work, ‘Animal Intelligence’ (1898), made his name as a psychologist, as much for its scientific method than the results these methods revealed. His method included the now familiar; representative samples, clear explanations of the experimental method so that it could be reproduced, comparative groups under the same controlled conditions and clear quantitative measurement. Educational psychology up to that point, and beyond, had been conducted in a non-scientific, if not misleading manner, Freud and Paiget being just two of many example.

His animal experimental work led to the formulation of two laws, based on the behaviourist Stimulus-Response model, which in his view, governed all learning, even in humans.

First the Law of Effect; that consequences, either rewards or punishments are a necessary condition for learning. This was shown to be wrong by another behaviourist, Tolman.

Second the Law of Exercise; that learned behaviour fades without practice and is strengthened with practice. The driver behind this is instinct. This focus on rewards, punishment and repeated practice was to dominate behaviourist psychology, and research into learning, for decades.

An important early finding was his work (with Woodworth) on transfer in 1901, namely the degree to which learning transfers to actual behaviour and performance in the real world. This is still an often ignored issue in education and training. Learning is largely (not always) a means to an end, namely the application of that knowledge or skills. Yet relatively few educators or instructors know or care much about transfer. Thorndike showed that transfer depends on the similarity of the situations or domains. This principle of ‘identical elements’ led him to recommend problem solving and practice in real-world contexts, so that the learning tasks and context matched the real world.

It is a strong argument for context rich learning,  learning by doing and workplace learning. Transfer involves personal, learning and organisational factors, as explained in What Makes Training Work by Weinbauer-Heidel (2018). These factors, when studied in longitudinal studies Gegenfurtner (2013) and literature reviews Gegenfurtner (2009) are largely in line with Thordike’s original theories on transfer.

This has had a lasting impact on simulations and now the design of workplace learning and learning in the workflow.

Personally, the learner has to want to follow through to experience practice and transfer and be confident that they can perform. Personal motivation and intention to transfer have been identified as drivers in successful transfer by Gegenfurtner (2013). Learning experiences must make them aware of the value of doing this in practice. Learners need to believe that they can master and apply what they learn in their work, then learn through practice and application. The training also needs to be clear about expectations in terms of application and doing,going beyond theory. True to Thorndike’s views, job relevance and the congruence between what is learned and what you do, has been a constant finding in the research, Botke et al., (2018). Beyond this, organisationally, learners should be expected to practice, with time available and support, especially social support Botke (2018), within the workplace. Opportunities to use what you learn on the job, Gegenfurtner et al. (2009), need to be made clear or linked to the original learning experiences.

To take a still current example, one still hears claims that Latin helps one learn other Romance languages or improve performance in other subjects, Thorndike predicted that this is unlikely as there are significant differences in grammar. In Search of the Benefits of Latin by Haas and Stern (2003) in the Journal of Educational Psychology (incidentally founded by Thorndike) revealed that Thorndike “did not find any differences in science and maths in students who learned Latin at school and those who did not” and in the Haag and Stern (2000) follow up study, two groups of comparable German students, where one studied Latin, the other English, were assessed after two years, “No differences were found in either verbal or non-verbal IQ or grades in German or Maths”. This had been predicted by Thorndike decades before, namely that transfer needs common ground in the source and target.

Now for the bad news. In language learning, Latin actually makes it worse. The problem with understanding Latin is that you need to pay close attention to word endings; case markers on nouns and time markers on verbs. But in English, and Romance languages, word order and prepositions are more important, endings play a minor role. What Haag and Stern found, predictably, based on Thorndike’s research, was that students who had learned one Romance language first, found it easier to learn another Romance language, than those who had learned Latin. Latin caused incorrect transfer, such as the omission of prepositions and auxiliary verbs in Romance languages. In other words, learning Latin was detrimental to the learning of the new language.

Thorndike took a particular interest in testing, developing intelligence and subject-specific tests. This was also to have a long-lasting effect on education, not always positive. Cyril Burt, an English psychologist, the first non-American to win the Thorndike Award by the American Psychological Association, went on to impose a regime of standardised tests, such as the 11+ (still used in some parts of the UK). Burt turned out to be a fraud and a cheat, as he falsified data and even the existence of co-workers.

Thorndike laid down methods for the scientific measurement of behaviour that were to be used by an entire school of psychology, the behaviourists, people like Watson and Skinner. Establishing scientific rigour in experimental psychology was just one of his lasting achievements. His work on transfer was long-lasting, although conveniently ignored, even today.

Thorndike, E. L. (1906). The principles of teaching: Based on psychology. New York: Seiler

Thorndike, E. L. (1901). The influence of improvement in one mental function upon the efficiency of other functions. N.Y: MacMillan.

Gegenfurtner, A., (2013). Dimensions of motivation to transfer: A longitudinal analysis of their influence on retention, transfer, and attitude change. Vocations and Learning, 6(2), pp.187-205.