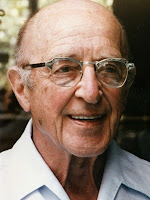 Carl Rogers is known as the founder of 'client-centred' therapy and his promotion of counseling. He also had a keen interest in education and his therapy-oriented methods became widely adopted in education and training through coaching, mentoring and other student-centred, Socratic techniques. Roger’s influence can be felt everywhere in modern learning with from open questioning techniques by tutors to counseling itself in schools and the workplace.

Influenced by Dewey, he emphasised the relationship between learner and facilitator. As early as 1951 Rogers had looked at 'student-centred teaching' in Client-Centered Therapy (1951), where he claimed that teaching is really ‘facilitation’ and that we must allow the learner to relax to learn and feel free from any form of threat. Freedom to Learn (1969) takes counseling principles and applies them to education. It explores facilitation and person-centred learning in schools. A collection of papers, it described preparation, creating an environment of trust and provocative input to stimulate discussion. Facilitation involved certain qualities and attitudes and realness in the facilitator of learning.
The facilitator must treat the learner with genuine respect and open up as one person genuinely communicating with another. When the mask of the professional or expert drops, facilitation is at its most effective. Facilitators must be themselves, in direct person-to-person encounters. More than this realness, is a feeling of prizing the learner, without being condescending. It is this, along with an acceptance that it’s fine to not know things, that promotes trust. Empathy, in the sense of understanding what is going on in the mind of the learner, seeing it from their perspective, is another feature of good facilitation. Learners need to be understood and not just judged.

However, non-directed teaching can have a debilitating effect on learners due to the lack of specific, directed feedback. It can also lead to too much reliance on the subjective reports of the learner, which are not always accurate or trustworthy. Being too empathetic can negate constructive criticism. Facilitated learning may benefit more from the honest dissolution of misconceptions rather than an abundance of empathy. Unfortunately, the therapy-oriented techniques aimed at troubled minds do not always apply to people who simply want to learn. Not knowing something is not an illness to be cured by therapy. Many learners also want a less moderated approach to learning. Dialogue may be more appropriate than pure empathy. In counseling, the idea that the client knew more than the counselor became the prevalent model. Unfortunately, this extreme form of the Socratic method is difficult in learning, where by definition, the learner doesn’t have the knowledge or skill to start with.

Rogers's influence on therapy, counseling and education is enormous. The general tone of learning through facilitation was set by him and continues to this day in the counselor/teacher/trainer/HR role. This has been positive, leading to a more sophisticated relationship between learner and teacher/trainer. On the negative side there is a difference between learner-centric and self-centred.
What seems like a sensible approach to human interaction, namely facilitation through authenticity in the facilitator of learning, has turned into its opposite - a sort of conformity of emotional control, where every sphere of life has become subject to a new emotional culture with therapeutic cures. Everyone is ill until proven healthy. Facilitated learning may benefit more from the honest dissolution of misconceptions rather than an abundance of empathy. Unfortunately, the therapy-oriented techniques aimed at troubled minds do not always apply to people who simply want to learn. Not knowing something is not an illness to be cured by therapy.