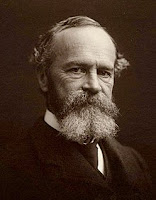 William James, close friend of the Pragmatist philosopher Charles Pierce and elder brother of Henry James the novelist, asked his younger brother to stay close for six weeks after he died, as he wanted to try to contact him from the next world. No messages were ever received but it showed how seriously he took real inquiry and experimentation. He first studied medicine, then empirical psychology in Germany (starting the first psychological laboratory in the US at Harvard) and later in life, a philosopher.

Widely regarded as the father of modern psychology, his The Principles of Psychology (1890) setting the tone for future inquiry into the mind, establishing psychology as a separate discipline; the scientific study of the mind. Grounded in his philosophical theory of pragmatism, James’s theories emphasised the consequences of one’s actions, and the development of habits, rather than pure theoretical speculation.

Like Locke, he wrote a practical book Talks to Teachers (1899), originally a series of lectures, giving practical advice to teachers. The difference is that psychology had now become, through his efforts, a science, and its principles could be used in practice. It was here that he put forward his now famous theory on learning by doing. This was to heavily influence John Dewey, and the future of educational theory through to Kolb, Schank and others. The book doesn’t pretend to have all the answers, as psychology is a science; teaching an art. But some psychological principles are clear.

James was the first to see emotions as an important constituent in psychology. They were not some correspondence between physiological events and conscious feelings but actual perception of those processes. Although Cartesian in essence, James saw the emotional world as a primary part of the stream of consciousness and therefore the process of learning.

Like Locke, he believed that education is, above all, the organization of acquired habits of conduct and tendencies to behaviour. Children should not be expected to learn by rote. Their experiences must be turned into useful and habitual behaviour through action, as early as possible. This automaticity makes some cognitive tasks easier, freeing the mind for other higher goals. There is then combination of heart, head and hands here that is beyond pure cognitive structures, a bodily, biological basis for habit. The learner must listen, but then take notes, experiment, write essays, measure, consult and apply. He warned us against seeing this as a purely scientific approach to learning.

The supervision of the acquisition of habit is another of his principles. “Habit is thus the enormous flywheel of society” and should be exercised until securely rooted. The result of almost all learning is this habitual behaviour encouraged in suitable learning habitats, which include self-interest, reflection, efficacy and control matter as these are what drives one towards gaining suitable habits. Human association, interest, attention, will and motivation; these are James’s driving forces in education. In addition there is memory, curiosity, emulation, constructiveness, pride, fear and love - all impulses that must be turned to good use. This is not to say that he favoured a lazy, or what he called ‘soft pedagogics’. He recognized that learning was sometimes hard, effortful, even arduous.

He warns us against reading too much in science, itself a changing feast, as it helps but does not wholly inform real, situated practice in the classroom.

He recommends learning through work and the creation of real things or dealings with real people in, for example, a shop, to give you educational experiences beyond mere theory. He was in fact a firm advocate of vocationally oriented schools and work-based learning. Learners are real, human beings situated in the world and have to see the connection between what they do and its consequences in that world.

Russell roundly attacked James Pragmatism claiming that it was ridiculous to say that “other people exist” means “it is useful to believe that other people exist”.  that Someone who holds a pluralistic position must also accept that their own theories are just one or some, among many. This paradox haunts pragmatism. It is related to another criticism, that of relativism. Once the relativist genie is let loose, it is hard to decide on which of the available perspectives is either right or the right pragmatic course of action.

William James proved to be a turning point in the history of both psychology and educational theory. He set both off in a more orderly fashion, introducing the scientific study of the mind as applied to learning. This has since proved to be by far the most fruitful approach to education and learning theory, although still often ignored. In particular, his emphasis on learning by doing still reverberates through Dewey, Kolb and others. James warned us about being too academic and imbalanced in our educational systems, ignoring the vocational and learning by doing. This is a lesson that has been ignored but many countries are now looking at rebalancing their national systems towards the vocational.