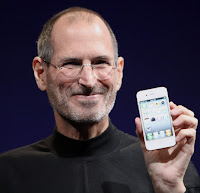 Adopted and brought up by working class parents who didn’t go to college, Steve Jobs, had a significant advantage for his future role. His father, Paul Jobs was a machinist and mechanic and had a workshop. He instilled an engineering outlook in Steve by giving him his own bit of the workbench when he was 5 or 6. He was encouraged to take things apart, build things and fix them. Being poor meant making do and making things work. He dropped out, after a short attendance, from Reed College in Portland.
Never fond of school “[In school] I encountered authority of a different kind than I had ever encountered before, and I did not like it. And they really almost got me. They came close to really beating any curiosity out of me.” he nevertheless excelled. Neither was his college experience particularly formative “I dropped out of Reed College… I couldn’t see the value in it.”

His impact on education has been indirect but significant, through the innovative hardware and software Apple has successfully sold. Apart from computers and laptops, some unique devices, notably the iPod, iPad and iPhone have all had uses in learning.
Podcasts were literally named after the iPod and popularised audio only learning. This focus on one medium allowed the learner to take notes (being hands free), review, even listen at double speed using the x2 button. In a sense, the absence of visual distraction allows the learner to focus on the meaning of the spoken content and use their own imagination. It was easy and cheap to produce and distribute and could be listened to on the move. Podcasts, as a medium, have grown into a significant media phenomenon.
The tablet has become common in schools with its easy interface, ergonomics and apps. Bearing an uncanny resemblance to the Victorian school slate, many claim it has become a valuable tool, especially  in early years and primary school learning. There has been some criticism of its large-scale deployment in schools, when procurement, planning and training for teachers has been poor.
M-learning (mobile learning) received a boost from iPhone smartphones. Their superb design and great interface has made them the phone of choice for millions. Learning experiences, such as search, Wikipedia, YouTube and other specific, online resources, such as Khan Academy and Open Educational Resources are increasingly accessed through mobile devices.
Above all it has been their attention to design detail, good interfaces and integration that mad them one of the most successful companies on the planet.

Learning content also received a boost with App Store, as a distribution service for educational apps, teachers and learners have thousands of general and subject specific apps available. Schoolwork, assignment, alerts and tracking are all available from Apple educational products.

Apple are, in essence, a hardware company, and many have criticised their activity in education as being a means to, not only establish their brand, but sell their goods. The large scale sale of tablets into schools has been criticised for encouraging device-fetish towards the use of technology in learning. Poor procurement, high costs, little attention to pedagogy and lack of teacher training, has led to a number of failed projects. Huge budgets have been allocated to devices, while bandwidth and software services have taken second place. Major schemes, such as those in California, have been scrapped as the cost, implementation and efficacy proved disastrous. There are also pedagogic problems with tablets, as their affordances make them poor for long-form writing and more advanced skills, such as coding, that require keyboards. Indeed, touchscreen keyboards can actually inhibit writing skills. Price is also a divisive issue for poorer students.

Jobs was a sceptic on the use of technology in schools, where he saw real teachers as having most efficacy. He saw technology as too reactive. However, he was highly critical of state education, supporting a private system with vouchers. “Innovation distinguishes between a leader and a follower” Jobs said and that was his major contribution, a stream of innovative technology that changed hearts and minds. It was this integration of devices and services that made Apple so attractive to both consumers and learners.