Khan - Khan Academy… a free, world-class education for anyone, anywhere 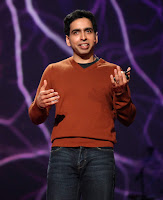 Like Google, Salman Khan’s Khan Academy, a not-for-profit, has an ambitious mission statement, to provide “A free, world-class education for anyone, anywhere”. He is an outsider in education, in that he comes from business, namely hedge-fund management and attributes his success, to not being part of the educational establishment. It is this that allowed him to get on and do what he did, which was create a large set of YouTube videos and learning management software, now used by millions around the world.

Khan’s work started by accident, when his cousin Nadia failed a maths test. Others, such as her brothers joined in and word spread. He tried Skype but it was too unwieldy for four or more students, so he recorded sessions and uploaded them to YouTube. The YouTube videos have proved immensely popular. There would be no Khan Academy without YouTube, a good example of how synergistic online services can mutually support each other. Innovation begets innovation.
He decided, boldly and deliberately, to keep the background black, like a chalkboard and eliminate the talking head. This was to make students feel as though he were sitting next to them not talking ‘at’ them. Faces, he thinks, are a distraction from the content. The advantages of recorded videos include the ability to stop, rewind, replay, take notes, hear again (especially if it is in your second language), practice and revision.
Khan does feel that educators fail to act upon their best research. Recognising that the standard lecture is an arbitrary time period and overlong, his videos are relatively short. He discovered that lessons of about ten minutes were long enough. He is particularly scathing about the lectures he received at MIT, many of which he decided to skip. In fact, by deciding to skip the “tired old habit of the passive lecture” he managed to do many more courses, double in fact. His anti-lecture stance was confirmed by his time at Harvard Business School, where case-based learning is the norm.

Having content on YouTube led to another innovation. On homework he is highly critical of teacher training and the fact that most teachers ‘wing- it’ on the design and setting of homework, with too much focus on quantity not quality. This led to the idea of the Flipped classroom, the idea that homework could do what was traditionally done in the classroom, deliver core content, leaving teachers free to do what they do best in class, teach and help students understand things they are having difficulty with. He acknowledges that it wasn’t his idea but his work allowed it to happen in practice.

From the start the Khan Academy included question software and, in adding a database early in its development, he found that the data was a useful learning management tool. His ‘knowledge map’ concept laid out subjects showing what depends on what, allowing recommendations on what should be taught next, not in a strictly linear way, but based on dependencies, not moving on until you had mastered the prerequisite learning. Mastery learning was his adopted teaching method, and he recognises that Benjamin Bloom was an important precursor. Self-paced learning was the means to deliver this mastery, competence-based learning. He is critical of traditional assessment and marking, claiming that partial success can be a problem. He calls it the ‘Swiss Cheese’ problem. He is not against testing but poor and inadequate testing. So on assessment he had streak tests of ‘ten-in-a-row’. He admits that ‘ten’ was an intuitive’ number but wanted the tests to be aspirational as well as motivational (when they got all ten right). In addition to tools for tracking progress, tools for teachers and exercises, there is also an adaptive, online exercise system, that personalises the learning and provides useful analytics.

Khan Academy started to be used in schools, initially in the Peninsula Bridge project in San Francisco. Early work identified the need to identify who got ‘stuck’ where, which became a key and sophisticated mathematical feature later in the development of the software. One of his conclusions was that this approach could avoid the downside of streaming by ability, which tends to bake inequality into the system. By allowing competence-based progress, this can be avoided. Another interesting finding was that students who struggled at first, sometimes streaked through when they had gained confidence, suggesting that Carol Dweck’s growth-mindset factor was at work in maths.
It was an email from a black student, that said “…can say without any doubt that you have changed my life and the lives of everyone in my family” that led Khan to leave his well-paid hedge-fund job. By this point he was getting more views on YouTube than Stanford and MIT OpenCourseware put together. Then, in 2010 Google, Ann Doerr and Bill Gates stepped in with finance and other pilot projects started in Los Altos with positive results. Use in schools started to expand significantly and globally. An interesting additional cohort of learners started to emerge – adults and professionals, who wanted to improve or close gaps in their knowledge of maths. Originally maths, the content has expanded into the sciences, finance, medicine, art history, computer science and continues to expand in terms of subjects and the number of videos and resources.

The One World Schoolhouse

His book, The One World Schoolhouse, sets out a vision for a free global education. Recognising that parents, and even teachers, may struggle with some subject matter, he sees reliable resources as essential for progress. In addition to the flipped classroom model, where students learn on their own through personalized software and content, then the teacher acts as a coach, enabler or facilitator, to do more sophisticated forms of teaching, the Khan Academy is available 24/7/365. He feels that this can free teachers and learners from the tyranny of time and location. Several other innovative ideas emerged in this text.

Khan favours multi-teacher classrooms on the basis that students and teachers are different and that variety on one side should be matched by variety on the other. Peer support and learning would also emerge, rather than isolating single teachers in their own classrooms. His vision is of large classes of a hundred or more, of varying age, without fixed periods doing a variety of tasks, including online learning.
He would abolish letter grades, echoing Dweck, Black and William. Students would have a running appraisal narrative, helped by software, that leads to rich and fruitful feedback. Mixed age classes would also allow students to help each other, allowing assessment of other social skills.
The ‘agrarian relic’ of the long summer holiday leads to billions of dollars of infrastructure lying inert and empty. It is a period of forgetting, except for the richer students who get enhancement through support at home. He would rather see perpetual learning, with staggered holidays, as in most other organisations.
He also recommends that we “separate (or decouple) the teaching and credentialing roles of universities “. This would dampen out social inequality and open up access and opportunities for all, as well as lowering costs and student debt. Less lectures, frees time for more intern work, not just during the Summer, and real projects. Subjects would have online support from services like the Khan Academy and others, namely good content plus adaptive software and student tracking.

Errors appeared in some of the content, which he admits and corrects. and he has been criticised for teaching without a deep knowledge of pedagogy. However, every effort is made to re-record and correct errors and improve on teaching methods. The flipped classroom concept has also been criticized for being difficult to implement in practice, especially for students that are not compliant on the autonomous work demanded by the model.

Far from being short of pedagogic knowledge, Khan is highly reflective and critical of the failure of education to pick up on valid research on lectures, competences, homework, efficiencies, cost, forgetting and learning styles. Khan does not like the way education ignores clear findings in research, as it hangs on to the past and fails to innovate. He is also critical of the cost of education pointing out the very high cost of traditional schooling with much of the budget spent, not on teachers but adjunct services. His belief is that the ‘enlightened’ use of technology through ‘technology enhanced teaching’ is the answer. Technology needs to “liberate teachers from…largely mechanical chores”.