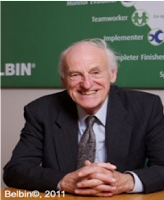 Meredith Belbin is an English researcher who empirically observed teams over many years and has extracted nine different clustered roles in well-functioning teams. These are roles, not individuals, so the same person can have more than one role. It is important that teams are heterogenous not homogeneous, so knowing the roles, like the functional parts in a well-functioning engine, matters.

Social behaviour within organisations is most often executed in teams. It is teams that execute projects, teams that are managed. Yet their optimal structure, in terms of types and competences is so often ignored, under the pressure of more general social training topics.

Resource Investigator
Uses their inquisitive nature to find ideas to bring back to the team. Outgoing, enthusiastic. Explores opportunities and develops contacts. Might be over-optimistic, and can lose interest once the initial enthusiasm has passed. They might forget to follow up on a lead.
Teamworker
Helps the team to gel, using their versatility to identify the work required and complete it on behalf of the team. Co-operative, perceptive and diplomatic. Listens and averts friction. Can be indecisive in crunch situations and tends to avoid confrontation. They might be hesitant to make unpopular decisions.
Co-ordinator
Needed to focus on the team's objectives, draw out team members and delegate work appropriately. Mature, confident, identifies talent. Clarifies goals. Can be seen as manipulative and might offload their own share of the work. They might over-delegate, leaving themselves little work to do.
Plant
Tends to be highly creative and good at solving problems in unconventional ways. Creative, imaginative, free-thinking, generates ideas and solves difficult problems. Might ignore incidentals, and may be too preoccupied to communicate effectively. Don't be surprised to find that: They could be absent-minded or forgetful.
Monitor Evaluator
Provides a logical eye, making impartial judgements where required and weighs up the team's options in a dispassionate way. Sober, strategic and discerning. Sees all options and judges accurately. Sometimes lacks the drive and ability to inspire others and can be overly critical. They could be slow to come to decisions.
Specialist
Brings in-depth knowledge of a key area to the team. Single-minded, self-starting and dedicated. They provide specialist knowledge and skills. Tends to contribute on a narrow front and can dwell on the technicalities. They overload you with information.
Shaper
Provides the necessary drive to ensure that the team keeps moving and does not lose focus or momentum. Challenging, dynamic, thrives on pressure. Has the drive and courage to overcome obstacles. Can be prone to provocation, and may sometimes offend people's feelings. They could risk becoming aggressive and bad-humoured in their attempts to get things done.
Implementer
Needed to plan a workable strategy and carry it out as efficiently as possible. Practical, reliable, efficient. Turns ideas into actions and organises work that needs to be done. Can be a bit inflexible and slow to respond to new possibilities. They might be slow to relinquish their plans in favour of positive changes.
Completer Finisher
Most effectively used at the end of tasks to polish and scrutinise the work for errors, subjecting it to the highest standards of quality control. Painstaking, conscientious, anxious. Searches out errors. Polishes and perfects. Can be inclined to worry unduly, and reluctant to delegate. They could be accused of taking their perfectionism to extremes.

Teams are common in the workplace and their make-up can be critical to their success. Belbin gave industry an empirically sound description of what constitutes an optimal team. It is a subject that has been studied in detail, especially in the military, and remains a topic of practical interest for learning professionals. It has become somewhat overtaken by social theorising but remains a sound guide to the practical problem of how teams should be constructed in the workplace, something social theorists often ignore.