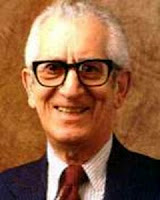 Benjamin Bloom’s is best known for his ‘taxonomy’ of learning, in Taxonomy of educational objectives: The classification of educational goals: Handbook I, cognitive domain (1956)but it has not stood the test of time as well as other aspects of his work around time to competence and personalised learning. Bloom claimed that his ‘taxonomy’ book was one of the most cited and least read books in education. The taxonomy was created to validate assessment items and learning objectives. It was designed to be used as an analytic tool to create balance in courses, balanced objectives and assessments. It was a regulating tool. Instead it was turned into a partial and misleading pyramid.

Bloom is known globally for his hugely influential classification of learning behaviours and provided concrete measures for identifying different levels of learning. In the 1950s there was a movement to identify a taxonomy of learning, as examinations were being used nationally in education. Bloom chaired the committee and they saw the top level of a taxonomy as three overlapping domains:

In the original version of the taxonomy, the cognitive domain is broken into the following six levels of objectives; Knowledge, Comprehension, Application, Analysis, Synthesis and Application.

Skills in the psychomotor domain describe the ability to physically manipulate a tool or instrument like a hand or a hammer. Psychomotor objectives usually focus on change and/or development in behavior and/or skills.

Skills in the affective domain describe the way people react emotionally and their ability to feel other living things' pain or joy. Affective objectives typically target the awareness and growth in attitudes, emotion, and feelings.

The taxonomy was devised to assist teachers to classify educational goals and plan and evaluate learning experiences. Unfortunately, he only published the first book on the Cognitive domain, co-authored with David Krathwohl, in 1956. It was another eight years until the second book on the Affective Domain was published. This led to an unnatural, over-emphasis on the cognitive side, captured meme-like by a coloured pyramid, that was never in Bloom’s work. His pupil, Anderson (2001) tried to correct these misconceptions, turning the nouns into verbs but the mythical Bloom endures.

In the 2001 revised edition of Bloom's taxonomy, written by Lori Anderson decades after the original publication (he had never read it), updated the taxonomy based on a more sophisticated understanding of cognitive psychology. The levels are slightly different and he abandoned the pyramid for a rectangle: 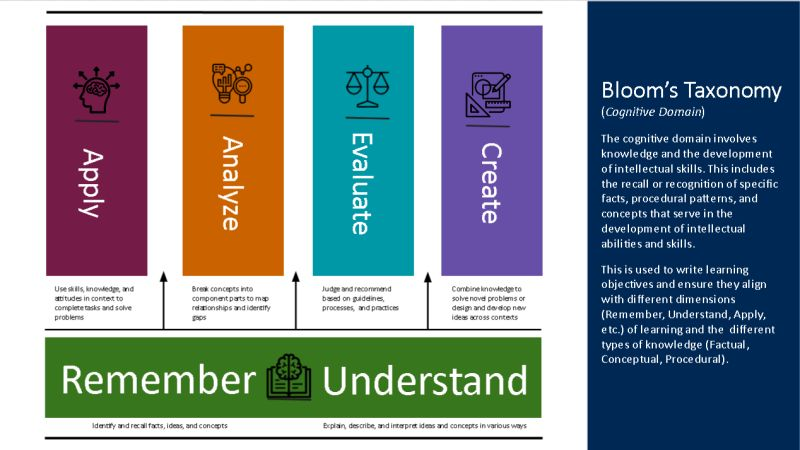 Note that there is no sense of higher and lower here, as they are often represented in diagrams. There is no hierarchy here. Unfortunately, they are still both misrepresented by coloured pyramids, that are over-hierarchical and devalue and diminish the role of knowledge in learning, placed at the bottom of the pile. Learning is neither a hierarchy of separate entities nor a linear process. It is a gross oversimplification.

It has been argued that Bloom’s taxonomy has done a lot of damage to teaching and learning. Learners from poorer backgrounds may have suffered badly from this devaluation of knowledge, as it is a necessary condition and the foundation for learning. That is not to say that all learning is remembering. Analysis and generated work are also important but this is not a linear process of climbing a pyramid, it is about an integrated approach. In reality, learning is non-linear and messier than many taxonomies and instructional theories suggest. It uses many of these activities in a more elaborate and networked fashion. The problem may very well be, say teaching the grammar and language of a language or coding before ever getting learners to actually practice dialogue or actually synthesize and code with a goal.

Indeed, we have had dozens of taxonomies that sliced and diced learning in all sorts of ways. These include; L. Dee Fink’s Taxonomy of Significant Learning Outcomes that goes beyond cognitive processes and includes other aims of teaching: Foundational Knowledge, Application, Integration, Human Dimension, Caring and Learning How to Learn; Wiggins and McTighe backwards design model describes Six Facets of Understanding: Explain, Interpret, Apply, Have perspective, Empathize and Have self-knowledge; Davis and Arend provide yet another categorization that can help educators determine which teaching methods are best suited for which learning objectives: Acquiring knowledge, Building skills, Developing critical, creative, dialogical thinking, Cultivating problem solving and decision-making abilities, Exploring attitudes, feelings and perspectives, Practicing professional judgment and Self-discovery and personal growth.

But Bloom’s, and other taxonomies, don’t pick up on contemporary findings from cognitive science, such as retrieval and spaced practice or technical skills.

Bloom’s other research led him to believe, in Human Characteristics and School Learning (1976), that learners could master knowledge and skills given enough time. It is not that learners are good or bad but fast and slow. The artificial constraint of time in timed periods of learning, timetables and fixed point final exams, as a destructive filter on most. The solution was to loosen up on time to democratise learning to suit the many not the few. Learning is a process not a timed event. Learning, free from the tyranny of time. allows learners to proceed at their own pace.

His true legacy, which is now starting to be realised and implemented through the use of technology, is personalised learning. Google’s Peter Norvig famously said that if you only have to read one paper to support online learning, this is it - The 2 Sigma Problem, where he compared the lecture, formative feedback lecture and one-to-one tuition. Taking the straight lecture as the mean, he found an 84% increase in mastery above the mean for a formative approach to teaching and an astonishing 98% increase in mastery for one-to-one tuition. In other words, the increase in efficacy for one-to-one learning, because of the increase in on-task learning, is immense. This paper deserves to be read by anyone looking at improving the efficacy of learning as it shows hugely significant improvements by simply altering the way teachers interact with learners. Online learning, in the widest sense of the word, promises what Bloom called ‘one-to-one learning’, whether it’s through self-paced structured learning, scenario-based learning, simulations or increasingly adaptive and personalised learning. The advances and availability of AI has made this possible, as explained in AI for learning, Clark (2020).

Bloom was also the first to really establish a solid, working taxonomy of learning. Unfortunately it was truncated and excluded the psychomotor and affective components, was caricatured as a hierarchical pyramid, its subsequent improvements ignored, leading to an overemphasis on the cognitive and artificially hierarchical and sequential nature of learning. It was also used to reinforce the prejudices among the academically minded, those who see knowledge, the affective and psychomotor and vocational learning as playing a diminished role in funded learning. One could argue that it has also led to an over-emphasis on 21st C skills, which explicitly devalue the role of knowledge in learning.

His longer legacy is more likely to be, not his outdated, partial and misleading taxonomy but how work on personalised learning. Free from the tyranny of time, he thinks mastery learning will produce better results for the majority of learners.

This is now manifesting itself in personalised learning technology that uses aggregated and personal data to deliver the right thing to the right learners at the right time. Resequencing content, based on continuous assessment of their personal progress is the realisation of Bloom’s research and dream of a massively more efficient and optimised learning process.