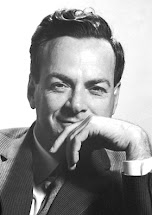 Richard Feynman, a Nobel Prize winning physicist, who was involved in the development of the atom bomb, also a pioneer in nanotechnology and quantum physics. His fame increased when he diagnosed the problem that led to the Challenger Space Shuttle disaster. He was regarded as a great science teacher and had a deep interest in teaching and learning, constantly reflecting on his own practices and institutional approaches. His lectures in physics are still best-sellers, yet he was deeply critical of the ‘lecture’ as a teaching method. On learning, he was strong on retrieval, simplification and the act of teaching to learn.

In his autobiography Surely You’re Joking Mr. Feynman! he writes cogently about his experience in teaching Physics to students in Brazil, where he stood up in front of the students and faculty (at their request) and said, ”The main purpose of my talk is to demonstrate to you that no science is being taught in Brazil”. His point was that the students were being taught to memorise techniques and formulae for passing exams, not understanding physics, “it’s not science, but memorising, in every circumstance”.

His scepticism about teaching methods of that time came from his time approving textbooks for schools in California, in 1964, which he found plainly wrong, using the wrong symbols or irrelevant.

Although lecturing extensively and publishing his lectures, it is in the 'Preface' to his lectures, written long after they were delivered, that his reflections on his own work matured. When he arrived at Caltech he was dismayed to find that the students who arrived full of enthusiasm for physics were being bored into submission by ‘stultifying’ lectures. He tried his best, including 3 problem solving lectures in the first year, mixing things up, introducing advanced but interesting content earlier than usual. So what were his thoughts?

First, ”one serious difficulty….there wasn’t any feedback from the students to the lecturer”. This, as a lover of the experimental method, was a “very serious difficulty”. He compares it to an experiment without any measurable output, a complete shot in the dark. And his general conclusions were clear, “My own point of view is pessimistic. I don’t think I did very well by the students….I think the system was a failure.” He quoted Gibbon, “The power of instruction is seldom of much efficacy except in those happy dispositions where it is almost superfluous.” In the end he admits that what is necessary is a more student-centred approach to learning physics through discussion and reflection, “It’s impossible to learn very much by sitting through a lecture”.

The Feynman Technique was built on the principles developed on his pedagogic writings. It is performative and takes the now popular and evidence-based concepts of cognitive effort and retrieval practice, to learn something. Without the process of recall and simplification, even teaching the content, you are never sure that you really know it. He believed that many teachers were fooling themselves into thinking they know their subject when they do not. As Bjork showed, it is easy to fall into the illusion of learning, thinking that because you’ve attended a lecture, read a book, watched a video,that you have learned the topic.

Learning this way is iterative, as you must go back to sources to fill in any gaps uncovered by your attempts to recall what you think you know. The act of writing, teaching, simplification and analogising, is a form of retrieval practice that increases understanding and retention.

His historical place as a Nobel Prize winning physicist is assured, yet his reputation has lived on in his approach to teaching and learning. It is often assumes that he was a fan of the lecture. Nothing could be further from the truth as he was keen to push retrieval and performative learning techniques that avoided the common trap of fooling yourself that you have learned something. One such technique is teaching someone who is much younger.