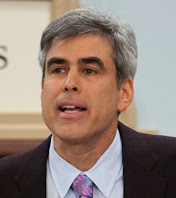 Jonathan Haidt is Professor of Ethical Leadership at  NYU Stern School Stern School of Business. His research and writing on the psychology of morality have taken him into cultural and political commentary on the nature of moral thinking, especially in political thinking as well as campus culture. His social intuitionalist position, expanded into a general Moral Foundations Theory, sees moral judgements as based on feeling and emotion, with reason coming later. As a centrist in politics he works to bridge political divides.

In The Emotional Dog and its Rational Tail (2001) and The Righteous Mind: Why Good People are Divided by Politics and Religion (2012), he develops his social intuitionist position, where feelings and emotions drive decisions and thinking, rather than reason. This developed into a wider Moral Foundations Theory, the claims that evolutionary and cultural legacies that have evolved, in different senses of the word, to solve problems of cooperation, as we plainly live in social groups and have for tens of millions of years. This has given us six innate moral foundations: care/harm, fairness/cheating, liberty/oppression, loyalty/betrayal, authority/subversion, and sanctity/degradation. Different political stances give each of these different emphases.

The Elephant and the Rider was a metaphor he used extensively in his The Happiness Hypothesis (2006) and elsewhere, to illustrate his social intuitionism. The Elephant is the quick, automatic, intuitive world of feelings and emotions, with the rider the slower conscious controller. This corresponds to Kahneman’s Systems 1 and 2 in Thinking Fast and Slow (2011). He uses this metaphor frequently to explain his social intuitionism in moral judgements showing that both the right and left tend to have emotional beliefs and values that they then rationalise afterwards.
He also helped devise the Disgust scale, an emotion that started as a biological protection of the mouth, then body and eventually moral concerns. Moral elevation is another phenomenon he identifies as a feeling associated with moral tales, producing oxytocin.

The Coddling of the American Mind

With Greg Lukianoff, in The Coddling of the American Mind (2018) he explored the idea that young people are becoming less robust and autonomous and gripped by three sets of false beliefs:

1. The Polarization Cycle is the rising political polarisation seen on campuses since the 1980s, and more recently, since 2016, where faculty have been targeted and, in some cases, fired or pushed out of their institutions.

2. Anxiety and Depression have been on the rise since 2011, especially among girls and young women, who may be more sensitive to social comparisons. As young people hit less developmental milestones, such as working in the real world, they find the overprotective culture of safetyism on campuses attractive.

3. Paranoid Parenting has led to restrictive childhoods, with less unsupervised play and helicopter parenting. Middle-class parents, in particular, tend to be more prone to paranoid parenting and therefore produce students who cannot cope with, or turn, adversity into growth.

4. The decline of free play since the 1980s has also led to an inability to deal with cooperation and dispute resolution.

5. The Bureaucracy of Safetyism, with more campus bureaucracy and administrators, along with a view of students as customers who have to be pleased through the student experience, has led to moral dependence.

6. Finally, in the ‘Quest for Justice’, social activism sees injustice as being caused by attitudes towards specific groups, and alternative discussions about the causes of injustice are negated and at times, censored.

Jonathon Haidt identifies ‘concept creep’ as one of the great ills of our age. The tendency to latch on to big words, wide ranging abstract nouns and stretch them like elastic to cover more and more things. He talks about the word ‘violence’ being used to cover much more than physical violence but also psychological violence, all sorts of offence. This he feels has infected campus culture to such a degree that ‘safe spaces’, ‘trigger warnings’ and ‘microaggressions’ have become tools of censorship.

Haidt’s critics have come mainly from the left but also from those that see this form of thinking about morality and politics as opening up space for attacks on science itself. Despite plenty of evidence to show that academia, especially in the humanities is skewed to the left, he has been attacked for diminishing the status and relevance of recent attempts to make that system more equitable by quietening dissent and protest. That he sees young people predictably as lacking resilience may be at odds with their legitimate protests and no more than predictable generation bashing.

Haidt’s work has extended out of academia into mainstream publishing, with his work being seen as relevant to both the problems of political division and conflicts and campus culture. The Coddling of the American Mind is seen by many as a diagnostic text for the phenomena seen in Higher Education around social justice, although he regards much of this as wrong-headed and at odds with what the culture of student and academic freedom should be. What he has succeeded in doing is raising legitimate concerns about the purpose and environment in which tertiary learning should take place, based on a theory of moral psychology. He remains a significant and influential commentator on such issues.

Haidt, J. and Lukianoff, G., 2018. The coddling of the American mind: How good intentions and bad ideas are setting up a generation for failure. Penguin UK.

Haidt, J., 2012. The righteous mind: Why good people are divided by politics and religion. Vintage.