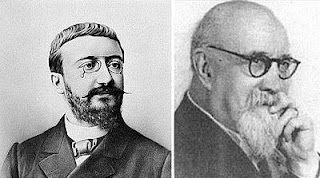 Alfred Binet (1857 – 1911) a French psychologist who with his pupil Theodore Simon (1873 – 1961) are known for inventing the first IQ test in 1905. Binet and Simon were involved in a public effort, through a Government Commission, to assess children with special educational needs and invented the first IQ test, in 1905. The purpose was to more accurately match children’s needs to educational needs and focus on children who needed help. His measure was related to ‘mental age’ and was to have a profound effect on the development of IQ tests, along with their implementation in educational policy and practice.

Early in Binet’s career he was involved in research on behaviour under hypnosis. This was controversial and it turned out that his critics were correct in saying the work lacked rigour. Binet learnt from this and from this point was more careful in his methods and data collection. His interest in psychology was intense and diverse but he limited his work largely to Paris, did not travel or even attend conferences in France.

They wanted to identify the mental age of children, not to separate them from supposedly more gifted children, but to focus on improving their education and accelerating their progress. It was clear in Modern Ideas About Children that his aim was improvement not to see cognitive abilities aas fixed and uneducable. Intelligence had to be carefully measured in terms of four steps: comprehension, invention, direction, and results. The purpose was to allow teachers not focus on inadequacy but what needed to be improved. Learners must be taught how to learn., as active learners His results showed a full year of ‘mental age’ improvement and astonished Government officials, who in some cases faile dth very tests the children had passed.

There was much interest in the post-Darwinian period on the capabilities of the human mind, Francis Galton and others focused on physical and physiological measures, such as brain size and perceptual capabilities. Binet, however, wanted cognitive measures.

They designed a series of cognitive tasks defined by ‘mental age’. The test items were not tests of memorised knowledge but of understanding and capabilities. These were not just written questions but generative tasks, such as stating sixty words in three minutes and counting money. The test items were also tested experimentally and adjusted in the light of these findings. Children were, on the basis of these tests, attributed a mental age and their educational futures determined on the basis of these tests. Tests were administered to children, say age eight. If the child could not complete those tasks they were given the age 7 tasks. This idea of mental age was a Binet-Simon innovation

It was the German psychologist, in 1911, William Stern that took this mental age, divided it by the child’s real age to give a ‘Mental Quotient’. In the US Louis Terman multiplied this quotient by 100 to produce an Intelligence Quotient (IQ). Independent testers

To avoid bias, they introduced the idea of independ trained testers to administer the tests. This was to avoid the accidental suggestion of the tester, especially teachers. It was important that a psychologist, not a pedagogue, delivered the tests. Binet and Simon were careful scientists and did not believe that intelligence was fixed and wholly inherited,

Binet and Simon did not see their tests as measuring hereditary abilities, indeed they saw social conditions as important. They believed that education and training could produce significant improvements. Neither did they see intelligence as being represented by a single number, such as IQ. Their work was simplified and reduced to something it was not. However, his carefully calibrated work and methods were later used in a more instrumental fashion by others.

The Stanford-Binet test was introduced to the US, after being developed over a few years, in 1916 and is still going.  ​​It is designed to measure intelligence across five types of cognitive ability; fluid reasoning, knowledge, quantitative reasoning, visual-spatial processing and working memory. Each of these five factors is given a weight and the combined score is calculated to an intelligence quotient, or IQ. Elsewhere this work was to shape and influence IQ work around the world.