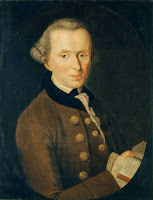 Immanuel Kant (1724 – 1804), the German idealist philosopher, spent his entire life in Koenigsberg. His transcendental idealism is a reaction to the empiricism of David Hume. Rather than experience being formative, space and time are given prior to experience, with experience being the appearance of a reality we cannot directly know, as transcendental things-in-themselves. We impose categories upon the world and senses, the individual and thus the role of reason are restored in Kant’s Copernican reversal.

As a teacher and Professor he taught a huge range of subjects but the text Lectures on Education, published just before his death in 1803 by his pupil Rink, although attributed to Kant, is actually a series of paragraphs culled and rewritten from his already published work. Nevertheless, these views on education, scattered across his works, constitute a coherent position.

He was influenced by Rousseau, who he often quotes, in particular, the novel Emile. Reason is restored to a position of determining morality and this is important as there is in Kant the unconditional nature of morality and the universalisation of moral principles. This is what shapes his views on learning. Morality comes from reason and not as Hume claimed, sentiment. That is why the child is not yet a moral being. Education, namely reason, must bring them to that position. Education is therefore linked to reason and being able to think and becoming a moral being.

Nevertheless, Kant’s is a very learner-centric view of learning, as the autonomous moral character must eventually come from the individual, not the imposition of morality by society or a religious authority. Although the child must have its needs met through nurture, discipline must be applied to restrain natural impulses. Animal nature is thus turned into human nature. This leads to the development of reason. Schooling is necessary as it exposes the rational child to others with the same developing kral outlook. This is also the place knowledge and skills are acquired, always with purpose and application, always with a moral outlook.

Education, for Kant, is therefore the development of moral character as having a good moral character matters in adult life. Obedience is important and education is about structure, schedule and strictness, imposed by parents and teachers upon naturally unruly children.

He also has a great deal to say on the details of instruction. He is clearly against coddling of babies and children and wants to cultivate the use of memory, combine knowing and doing, avoid fiction when young, encourage games but work is not play. He extols the virtue of social interaction and the Socratic method of instruction. Maxims, rules and school laws should be in place and truthfulness encouraged.

Education is a civilising process that leads us into a single humanity, a rational species that can be seen as one community politically with universal moral and political beliefs, leading to an ever-perfecting humanity and perpetual peace. We are in this sense educated not for the present but the future.

The goal of moral education, the elimination of evil and the goal of progress towards moral perfection may emerge from Kant’s philosophy but it has a philosophic purity that is far from reality. Morality is not something that seems to be taught through reason but rather felt through an innate need to empathise, sympathise and feel altruistic towards others. To attach a moral dimension to all learning seems at odds with some of its clearly utilitarian needs. Kant’s elaborate philosophy gave birth to his pedagogy but its stark dependence on reason reflects the disassociated, childless bachelor he was.

While he had an influence in prescribing a moral side and purpose to all education and this was picked up and transplanted into the US by those, such as John Dewey, whose doctoral dissertation was on Kant, his influence has been minimal, nowhere near as much as his philosophy.

Kant, I., 2017. Kant: The metaphysics of morals. Cambridge University Press.

Lectures on Education https://oll.libertyfund.org/title/davids-kant-on-education-uber-padagogik#preview
at November 14, 2021