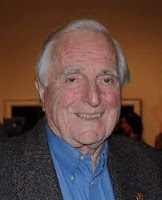 Douglas Carl Engelbart (1925 – 2013) was instrumental in establishing human-computer interaction as an area of technical and psychological research, playing an instrumental role in the invention of the computer mouse, joystick and tracker-ball, also bitmapped screens and hypertext. These and other prophetic features were shown in the famous ‘Mother of all demos’ in 1968. He also put forward an early and full vision of collective intelligence and the idea of collective IQ. He envisioned much of this before the advent of the internet but foresaw the importance of networked knowledge and the networked organisation.

While in the Navy he read Vannevar Bush’s article As We May Think and saw the possibility of a shared network being able to be more than the sum of its parts.

We need to get better at getting better. To do this we needed to augment our individual intellects with techniques that leverage collective knowledge. He saw this as the solution to solving complex problems. He called this Bootstrapping and at the heart of the Bootstapping Paradigm was his Dynamic Knowledge Repository (DKR) which allowed a process called the  Concurrent Development, Integration and Application of Knowledge (CoDIAK). This DKTR is also subject to the CoDIAK process.

There is, of course, the human activity with tools and within networked technology but Englebart’s focus was on

B-level improvements on that process, such as quality control

C-level improving on the improvements.

This C-level is the most im[ortant for exponential improvement. It is what he meant by getting better at being better and is an iterative process where lessons learnt are included in the process of improvement.

Beyond the mere qualitative description of the web being a place where collective intelligence could flourish, in 1994 he proposed a measure for such intelligence - collective IQ. It measures ‘effectiveness’ or how well groups work together to anticipate and respond to problems and situations.

This could be a product, service or research goal. Whatever the goal, Collective IQ determines the effectiveness of the response. Speed and quality of response are the key measures, along with development and deployment. It is not an abstract measure of reason but a measure of getting things done and completed, to meet the goal.

Complex goals need more collective IQ, so it is challenging projects, such as the Moonshot or Manhattan project that are often quoted as examples, where collective efforts resulted in goals being met faster and more effectively than they would have been, on the basis of a less collective effort.

The components of Collective IQ are, unlike the brain and individual IQ:

Collective IQ can be raised or lowered through ignoring, obstructing the bootstrapping process.

Engelbart’s invention of the mouse and initalm work in envisioning the internet is reason enough to see him as an influential pioneer. His further work on collective intelligence saw the start of serious analysis of networks in terms of their emerging features as forms of collective effort and intelligence.