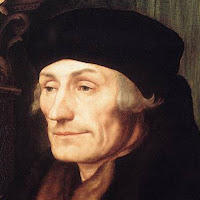 Desiderius Erasmus (1466 – 1536) after whom the EU student mobility sche was named, was a truly European figure, having worked in the Netherlands, Belgium, Germany, Italy, Switzerland, France and England. He is a pan-European figure, the ‘prince of Humanism’ who marks the end of slavish scholasticism and played a role in the Reformation that got his entire corpus prohibited by the Catholic Church. He also marks a change in attitudes towards learning, where the word ‘humanistic’ is entirely appropriate. His unpleasant experiences at various schools ‘torture chambers’ led him to reflect deeply on their failures and he wrote extensively throughout his life, not only on what should be taught but how it should be taught, with particular sensitivity towards the learner.

Many of his most famous works have the sensitivity of the humanist teacher. His Adagia (1500), 800 proverbs in Latin, were typical of the moral teaching of the day, taking ancient wisdom and reforming them for modern times. In Praise of Folly (1511), written in England, provocatively, under the cloak of satire, attacked the abuses of the organised religion, the Catholic Church, monasticism and many other secular conceits.

Copia: Foundations of the Abundant Style (1512), written while at the University of Cambridge, is a textbook on rhetoric or style, teaching technique for both the spoken and written word. This combination of pedagogy an emphasis on rhetoric and style is typical of his education writings.

In The Right Method of Instruction (1511) Greek and Latin are seen as an indispensable foundation for education, yet not through hemmering home rules of grammar but by reading and practice. It is Greek literature that he holds as offering the most in terms of content. Note taking is essential, so have a notebook at hand and write, in your own words, in a manner that is concise and easy to learn and recall, so he disapproves of the practice of taking down a lecture just as it is delivered. Memory has three aspects: full understanding of the subject, logical ordering of the contents and repetition to ourselves. You must test your memory vigorously, and minutely. He also recommends learning aids such as charts, tables and diagrams. Finally, try to teach what you know. This puts your own knowledge to the test. On teaching, he refers back to his Adagia for topics to speak or write upon. There is the move up from the basics through argumentative essays to original composition.

On Education for Children (1529) is his testament to the power of education. He goes to great lengths to encourage early education. One must draw out (e-ducare) good traits and behaviours while discouraging the bad. You become what you read so he strenuously recommends ancient texts, as opposed to argumentative scholastic sophistry, chivalric literature or the myths of King Arthur. He implores parents to educate their children. For the parent and teacher he is dismissive of rote-learning, the importance of play and the avoidance of punishment.

There is even a work on child behaviour, On Civility in Children (1530),  a treatise addressed to a boy on how to deport oneself, avoiding the faults of others. In The Education of a Christian Prince (1532) he puts an emphasis on seeing learners as individuals. A good teacher is gentle and avoids corporal punishment.

While a man who challenged the norms of his age he was also very much a man of his age, with an intense zeal for Greek, Latin and ancient writings. To be fair he wanted the Bible to be available in all languages as he saw the message of Christ as universally enlightening. This laying down of Green and especially Latin has also, arguably, had a lasting influence that has lasted past its relevance and usefulness.

As a towering intellectual his influence on European culture has been huge, marking as he did a profound shift towards humanism. This was the time of the Reformation and he also played a role in this movement, albeit as an observer, as although he agreed with Luther, he disagreed with his methods. He was a scholar not a politician or reformer. His name lives on in the EU Erasmus programme, a scheme for the mobility of students and international study.