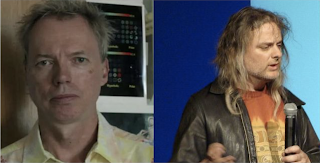 Andy Clark, a philosopher at the University of Sussex, who with David Chalmers, an Australian philosopher and cognitive scientist at the New York University, proposed the Extended Mind Thesis (EMT) in their paper The Extended Mind (1998). Some, such as Panksepp and Lakoff, see embodied cognition as an extension of the mind within the body but Clark and Chalmers extend mind, or cognition, beyond the body. They build upon situated cognition (Suchman 1987), dynamical approaches to child development (Thelen and Smith 1994), studies of real-world-robotics (Beer 1989) and research on the cognitive properties of collectives of agents (Hutchins 1995).

What is mind? As you read this from a screen the text is in your mind. The technology seems invisible, part of your consciousness. When we lose our smartphone or laptop we feel the loss, they think, because they have become part of our extended consciousness and mind.

Clark and Chambers see the use of technology, such as pens, diaries, calculators, computers and smartphones as extensions and part of consciousness. We, as humans, have minds that reach out beyond our skulls and bodies into the world, literally extended minds that treat technology that we can store and retrieve memories to and from, as being part of our minds. It is an active form of externalism where the environment can drive cognitive processes. External objects function as part of the mind. These objects must do what internal processes do -  the external objects must function with the same purpose as the internal processes, store and retrieve memories, help minus solve problems and so on.

Imagine a person looking at geometric shapes and holes on a computer screen. One uses their mind to fit shapes to holes. The next uses a ‘rotate button’ to match the holes. A third has an implant to rotate the shapes. How much ‘cognition’ is present in all three of these cases? They all think about the same thing and get it done. Clark and Chalmers see no distinctions and regard the external process as on a par with what one would simply do in one’s head. When using this technology we’re using a coupled system that has the same causal effect on behaviour as relying just on memory and thinking. Whether it is in the head or not is immaterial.

Language, they also see, as one major example of an extended technology being ‘in the loop’ of cognition.

While not presented as a learning theory, one can immediately see how the same extended mind idea can be applied to the cognitive process used in learning and they do discuss the extended mind’s role in learning. Learning itself involves the extensions we use to learn, the “physical and computational artifacts” we use in schools and work in a “densely coupled system”. More than this they speculate that this coupling with external tools and artifacts may have been involved in the development of cognition.

Clark and Chalmers call this learning technology ‘environmental supports’ and use the examples of pen and paper to do (or learn) long division. This theory matters in learning, as the tools we use for input, such as pens, pencils, keyboards (physical & touch), audio and video recording devices and even musical instruments can be seen as extensions of the mind. Learning is almost always an active engagement using these mind extensions.

The idea, they think, has some interesting consequences. Take morality, it may be that as data about us is out there and used in interactions with us, the old idea of a moral agent trapped inside their own heads becomes more dilute and that part of who we are is out there.

Chalmers has suggested a redefinition of the extended mind in terms of sensori-motor interactions with external tools and technology. Others still see a clear boundary between mental states, cognition and external entities. There is also the slippery slope problem of determining where exactly the extension stops causally out from say a smartphone to the internet to other devices, satellites and so on. Does the use of a GPS device involve, as a cognitive act, the triangulation of many satellites and data collected from cars tracking traffic jams? That’s a stretch.

Clark and Chalmers have had some traction through popular books on learning such as The Extended Mind by Annie Murphy Paul (2021) and is discussed in detail in AI for Learning by Clark (2020). Margaret Boden in Mind and Machine thinks that thesis area cognitive technology will hold our attention for the next 100 years.

Chalmers, D.J., 1996. The conscious mind: In search of a fundamental theory. Oxford Paperbacks.

Thelen, E. & Smith, L. 1994. A Dynamic Systems Approach to the Development of Cognition and Action.