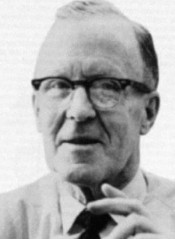 Donald Olding Hebb (1904 – 1985), a Canadian neuropsychologist, is famous for his eponymous ‘Hebbian learning’ theory, where learning is explained as connectionism, the creation through connections, then stimulation, of neural assemblies. This was presented in The Organisation of Behaviour: a neuropsychological theory (1949) and has had a profound influence on both neuropsychology and later interest in neural networks in artificial intelligence. His interest in learning came through his experience as a teacher but his research at McGill, the University of Chicago and Harvard.

As a teacher and Headmaster at a school in Montreal, he had developed views on teaching practice. He believed that motivation had to come from the selfm, the learner and that teaching was largely about creating the environment and opportunities for motivation and therefore learning, to take place. One could teach good learning strategies and create the right environment of learning but, ultimately, learning motivation and learning itself, come from the learner. This deep interest in learning led him to speculate on the physical nature of learning in the brain. His ideas on early years education and exposure to lots of stimulating experiences still resonate today, especially in many national early years policies and programmes, such as Head Start.

Learning by association had been presented by the British Empiricists Locke, Hume and Mill. Alexander Bain and William James also laid out theories that were similar to Hebb but no one had a detailed theory on the mechanisms.

At Queen’s University Hebb helped design the Hebbs-Williams maze to measure animal intelligence. This was used to show that early sensory or experiential deprivation in rats led to increased cognitive development. Building on these animal experiments, he went on to develop a theory of learning that is colloquially summed up as "Neurons that fire together wire together."

Descartes had speculated that the pineal gland was the point where the material brain interacted with the immaterial mind. He never explained how this interaction took place but it was Hebb who explained learning and thinking in terms of actual neurological or biological phenomena. Although other fields of psychology had explanations of external exposure to learning it was Hebbs who provided a concrete theory that explained learning in terms of actual neural, brain activity.

“When an axon of cell A is near enough to excite cell B and repeatedly or persistently takes part in firing it, some growth process or metabolic change takes place in one or both cells such that A's efficiency, as one of the cells firing B, is increased.”

This is known as Hebbian learning, physiological psychology, the first real theory that proposed an actual mechanism for the encoding of knowledge and memories. Groups of neurons that learn together are ‘cell-assemblies’.

Seeing learning as connections between groups or assemblies of neurons, thinking was exactly this, where thoughts and ideas are ‘phase sequences’. External or environmental reinforcement and exposure to new experiences created learning or memories, so he recommended enriching exposure to different types of experience to create neural connections and assemblies. He went as far as exposing rats to many different types of experience and claimed that they showed higher performance in performing maze tasks.

There is a dark side to Hebb’s work. It is claimed that his research into sensory deprivation, with student volunteers, was funded by the CIA. Sensory deprivation has long been one of his research interests and on seeing the results from Russian confessions, the US Government was involved in replicating possible interrogation and ‘brainwashing’ procedures.

We now know that synapses grow and that the mechanism is also chemical through neurotransmitter molecules, with potassium and sodium ions changing the voltage but the model heads in the right direction. His lasting influence is in Artificial Intelligence, where his ideas were used, by analogy, to create neural networks, the foundation of one area of fruitful type of artificial intelligence. We see, for the first time, we as a species use what we know physiologically about our own brains, to take a leap into creating something that mimics or matches our brains, maybe even surpasses them.