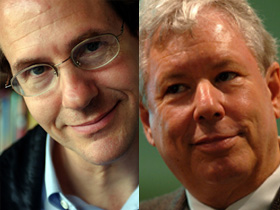 As is sometimes the case, the catalyst for a theory is a popular book. Nudge theory hit both the popular and professional consciousness when Richard Thaler and Cass Sunstein published Nudge: Improving decisions about health, wealth, and happiness (2008). Thaler is a Nobel Prize-winning behavioral economist. Note that education or training is not in the title but they touch upon education and the principle or technique can and has been applied in learning. They call their approach libertarian paternalism, where people are gently nudged into doing what is best for them, through small nudges and steps which can lead to significant changes in behaviour. They have had enormous influence as behavioural economics and psychology influenced government policies.

Nudge theory reverses the idea that we tell people what to do or legislate that they should do something. Behavioural psychology and economics starts first with people; where they are, what they are doing and what they need to do to improve their health, finances, happiness and learning. They recommend thinking about problems in terms of ‘choice-architecture’ that changes attitudes, knowledge, skills and behaviour, with small nudges in the right direction, rather than large-scale programmes and training.

Thaler & Sunstein start with the now famous example of an etched image of a fly in the urinals at Schiphol Airport, in Amsterdam, where spillage was reduced by 80%, playing to men’s playfulness in trying to hit the fly. Smaller plates were found to lead to less food waste. Turn rubbish bins into characters with big mouths.

You must use choice-architecture to avoid the natural inertia that exists in behaviour. Drawing on the work of Kahneman and Tversky on anchoring, availability and representativeness, they give not only many examples but some guidance on how to design nudges.

Some of their design recommendations are useful. Think in terms of defaults - assume that people will default and take the path of least resistance and not read the manual! Expect Error - to err is human, so always assume that users will make errors and mistakes. Map your digital architecture or choices onto useful outcomes for consumers. Simplify and structure complex choices. Also provide incentives such as showing the costs of electricity used, as you use it. Give feedback - tell learners they’re doing well or making mistakes and why.

They also call on research by Asch (1995), where people answered questions correctly on their own but, defying the evidence of their own senses, got things hopelessly wrong they saw others give wildly wrong answers. People are therefore heavily influenced by others in decision making, through groupthink. This conformity rate seems to happen 20% - 40% of the time. Peer pressure, explored in brilliant detail by Judith Harris appears to be a problem. Sherif (1937) found that this group effect was stronger in small groups, especially when they had to make their results public. This has led to nudges both avoiding the peer pressure of inertia but also the efficient design of nudges that use social pressure, for example, in the UK Government’s EAST methodology. This is important in learning where social or peer pressure can be used to push individuals forward.

We make poor decisions about our health, wealth and happiness. We also make poor decisions about teaching and learning. In education and training the course; hours, days, weeks, even years long, has been the dominant paradigm. You have to go somewhere at a certain time to be taught something. Yet subtle nudges that introduce learning into your routine, may help you sustain a learning experience, like learning a new language.

They point towards a high degree of ‘unrealistic optimism’ about learners’ self-perceived performance, something they also found in self-judgements among faculty. This unrealistic optimism is common in high stakes decision making, such as the success of marriage. People need to be nudged out of these misconceptions. Creative nudges have been used in advertising, marketing and public contexts by governments and organisations, nudges are now commonly used in online learning. Notifications in adaptive learning systems to propel learners forward. They can be used to deliver timely reminders, even content, based on personal and aggregated data to motivate learners without delivering courses and content. Clark (2020, 2021) and others recommend using techniques such as micro-videos to nudge managers towards using better management techniques or making people aware of security problems like phishing.

Some see Nudge theory as a new form of paternalism, even worse a manipulative technique that goes against the freedom of choice and agency that we should have in life and work. Rather than change laws and policies or demand that processes and procedures in organisations are changed, the theory is used as an ‘under the radar’ marketing tool to effect change. In the context of social media it has been criticised as being the driver towards polarisation, as people are nudged through algorithmic and marketing techniques, such as ‘likes’ to drift towards more extreme positions. The concept has also been seen as vague and ill-defined, as anything that is a stimulus to action and that what is new is not the idea but its role in popular behavioural psychology. They are openly libertarian and so on school choice they think that nudging parents to make good choices is the solution and the rest is a given. This ignores the many other possible ways of making schooling better and fairer.

Nudge theory has been taken up by governments and organisations as part of change management programmes. The UK government has what is called a Nudge unit, which has developed its own EAST method. In learning it has been given life by the rise in LXP (Learning Experience Platform) technology, where notifications and nudges are pushed to learners, rather than courses.

'Nudge' by Thaler and Sunstein is the book that took a theory from behavioural psychology into a mainstream policy technique for many governments. It also found a place in learning, as a method of increasing the efficacy of learning.